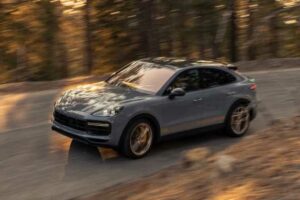 Earning the title of being the quickest SUV around Germany’s famed Nürburgring Nordschleife is the reason why the 2022 Porsche Cayenne Turbo GT has been getting headlines, but you actually forget about the ‘Ring after you spend a weekend behind the super SUV’s wheel. It doesn’t matter where you drive it: The Cayenne Turbo GT conquers any kind of pavement you can find.

Based on the Cayenne Turbo Coupe, the new Turbo GT packs a powerful V-8 engine, a quick-shifting transmission, and a bunch of enhancements that make it Porsche’s fastest-ever production Cayenne. Just look at the numbers: 0-60 mph in 3.1 seconds, quarter mile runs in 11.6 seconds, a 186-mph top speed, and a Nürburgring lap time of 7 minutes, 38.9 seconds. The latter bested the previous ‘Ring record for SUVs—held by Audi’s RS Q8—by 3.33 seconds, but the eye-popping figures are only one side of the story. You don’t need a monster racetrack to enjoy it, because the 2022 Porsche Cayenne Turbo GT shines and gets your attention just as well on flowing canyon roads, as its inspired performance injects you with adrenaline.

The Heart and Soul

The 2022 Porsche Cayenne GT’s 4.0-liter twin-turbo V-8 takes center stage with its 631 horsepower and 626 lb-ft of torque. While these numbers don’t match the Cayenne Turbo S E-Hybrid’s, make no mistake: the Turbo GT is Porsche’s most performance-oriented SUV. In this case, Porsche’s much-lauded GT team did not help with the car’s development, but the Turbo GT proves its point all the same.

Besides the powerful engine, Porsche gave the SUV several enhancements to make it drive even more like a sports car. The air suspension is 15 percent stiffer compared to the Cayenne Turbo, with the system adjusted to handle the extra power. The power-steering setup and rear-axle steering are also retuned, and Porsche engineers said they were overall able to reduce body roll and increase the car’s precision in corners. The Cayenne Turbo GT’s 22-inch Pirelli P Zero Corsa tires were developed for the Turbo GT, and its carbon-ceramic brakes, distinguished by their yellow calipers, measure a massive 17.3-inches in the front and 16.1 inches back. The Cayenne Turbo GT is also 0.7-inch lower than the Cayenne Turbo Coupe, and its all-wheel-drive system includes a water-cooled transfer case to support the model’s ultra-high performance.

Porsche thankfully also focused on reducing weight. The titanium sport exhaust and the SUV’s wheels, for example, shaved some load. Other bits exclusive to the Turbo GT include a carbon-fiber roof, a unique front fascia with larger air intakes, a center exhaust pipe, and an awesome-looking carbon-fiber fixed rear spoiler.

How Does the Cayenne Turbo GT Drive?

Angeles Crest Highway north of Los Angeles is one of our favorite roads on the planet. Not only is it on our backyard, it’s also one of the best roads on which to exercise a great car, period. It was on this turf where the Cayenne Coupe Turbo beat the Mercedes-AMG GLE63 S, Maserati Levante Trofeo, and BMW X3 M and X6 M for a ticket to last year’s MotorTrend Best Driver’s Car competition. It’s a logical place to try out this new model, in other words.

While the 2022 Porsche Cayenne Turbo GT’s power figures raise eyebrows, its handling and steering impressed us the most. In every corner, the Cayenne Turbo GT felt balanced and stable. It rotated nicely on the twisty roads while maintaining a composed posture. What’s even more impressive is the degree of confidence you feel behind the wheel. The GT does everything so well, it encourages you to try harder for the next corner, braking later and carrying more momentum through to the exits. We’ll remember the time we spent in this vehicle on Angeles Crest as nothing but 66 miles of worth of ecstasy.

Like in a sports car, the GT’s suspension is calibrated so you feel almost every bump or rut. Its tires feel like tar, delivering massive traction, and its steering is as accurate as you’ll find in an SUV, or in virtually any vehicle. Simply aim the steering wheel’s yellow center stripe in the right direction, and you probably won’t have to move your hands again. The steering’s stiff overall feeling is reminiscent of a 911 Turbo S.

Then there is the lightning-fast transmission and the Turbo GT’s power delivery. The transmission is so quick and so well calibrated, you pretty much don’t need to ever use the paddle shifters for any reason other than you just enjoy doing so. Step on the throttle and you feel the torque get to the pavement with linearity and seemingly endless push. The experience makes you feel like a kid riding an infinite sugar rush.

The ride can feel a bit harsh on city streets, thanks to the wheels and tires and stiffer suspension. You’ll also note that these tires are loud. Another thing to note: The loud exhaust note, even when the sport exhaust is switched on, doesn’t make it into the cabin as much as we’d like. Stand outside, though, and the roar is impressive.

A sea of Alcantara is probably the first thing you’ll notice once onboard the 2022 Porsche Cayenne Turbo GT. From the sport seats to the door panels to the steering wheel, the GT is covered in the suede-like material. Additionally, the bronze-like seatbelts, seat inserts, and contrast stitching match the Neodyme wheels and distinguish the Turbo GT from other Cayenne cabins. Black or red leather is available as an option.

Also helping to differentiate this version from other Cayennes are Turbo GT logos throughout the cabin, a red button on the drive-mode selector, and the lack of metal around the air vents. Everything else, however, is very similar to the Cayenne Coupe, including the center console’s sporty handlebars.

It’s no surprise the 2022 Porsche Cayenne Turbo GT is fast, fun, and agile, words we’ve used to describe other Porsches in the past. The way it accelerates and brakes, combined with its magnificent grip and its lack of significant body roll, make this Cayenne worthy of the GT badge. Being the quickest SUV around Nürburgring is one thing, but delivering joy, confidence, adrenaline, and a raucous good time on real-world roads is what makes the Cayenne Turbo GT really stand out as special.