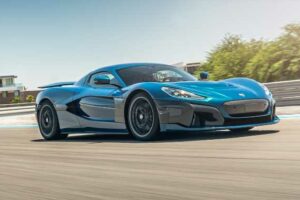 The new 2022 Rimac Nevera electric hypercar is designed to be quick. The tiny Croatian automaker promises the Nevera will be both the quickest-accelerating car and the fastest electric car in the world, with a top speed of 258 mph. So why shouldn’t our first drive of the Rimac be equally quick? The automaker was in Los Angeles to show prospective buyers a preproduction Nevera, and in between clients, it tossed us the keys to its $2.4 million baby. The only instructions? Be quick—the car is due back in an hour.

We first set sights on the Rimac Nevera sitting in the lot of a Beverly Hills exotic car dealership. It’s 6 a.m. on a Tuesday. L.A. is up, but it isn’t at ’em yet. Peak rush hour is about an hour away, but Rimac isn’t ready to hand over the Nevera yet, so I spend some time poking around and getting familiar with the car.

Built by hand in Sveta Nedelja, Croatia, the Nevera is an engineering marvel—especially when you consider Rimac is a 12-year-old automaker headed by a 30-something CEO and that it hails from a country that technically never built a car before. (“Technically” because Croatia was part of Yugoslavia, a country with a well-known though not storied automaking tradition.) Underneath the Nevera’s carbon-fiber tub sit four house-built permanent-magnet electric motors. Combined, they produce a staggering 1,914 horsepower and 1,741 lb-ft of torque. Those motors are capable of instant torque vectoring, and if the driver so chooses, the Nevera can switch between front-wheel and rear-wheel drive with the twist of a knob.

The motors are backed by a massive homebrewed 120-kWh battery, which will be the second-largest battery pack available on a production car once the Nevera goes on sale in December. Only American startup Rivian’s battery pack is bigger, at 133 kWh for its “Large pack.” Rimac says it expects about 340 miles of range on the generous European WLTP cycle. But driving it the way we did will likely result in something more like 150-200 miles.

Rounding out the package are giant 15.3-inch six-piston carbon-ceramic Brembo brakes, an electronically adjustable suspension (with a very handy nose-lift function), and active aero. The Nevera’s bodywork takes the traditional “mid-engine” hypercar form, except it features a 3.5-cubic foot trunk where the engine would be on most other cars accessed through the rear glass. Its styling is fairly conservative, but Rimac is also building the mechanically identical Pininfarina Battista alongside the Nevera for those looking to make more of a visual statement.

There’s definitely something to Rimac as an entity. Both Hyundai and Porsche own parts of the company, Rimac’s engineering arm licenses its technology to Koenigsegg and Aston Martin, and it just bought Bugatti off of Volkswagen.

As 7 a.m. rolls around, we finally get the chance to hop in and slot the Nevera out into rush-hour traffic. Most hypercars have a bit of a learning curve as you figure out their idiosyncrasies, but not the Nevera. The Rimac isn’t intimidating as we jockey for position merging onto the I-10 freeway and point the car’s nose toward the Pacific’s morning marine layer. Maybe it’s the lack of an engine roaring behind or the missing transmission shifts, but in the Nevera it’s a pleasing hum and whine from the power packs that make up the majority of the soundtrack. There’s tire and suspension noise, too, but the Rimac’s chaperone assigned to ride along with us notes that noise, vibration, and harshness tuning isn’t finalized.

In a welcome change of pace for a hypercar, visibility is surprisingly good. The Nevera shrinks around you, making it easy to place as if it were an extension of your body. The immediate and smooth power delivery helps, as well. The Nevera pulls hard but not violently. It can be docile, but when a gap opens as I-10 flows into the Pacific Coast Highway heading north toward Malibu, we plug it instantly. Like a Tesla Model S Plaid, it’s truly hard to wrap your mind around how quickly and effortlessly the Nevera builds speed as it pins you back into your seat.

With traffic building up, we duck the Nevera onto one of Malibu’s canyon roads for a taste of how the Rimac corners. These particular roads are perhaps better suited to lesser performance cars—they’re too narrow, and the straights so short you don’t dare unleash the Nevera’s nearly 1,914 hp—yet the car is promising. Most supercars and hypercars aren’t particularly fun at these speeds, but the Rimac Nevera is fairly engaging, with quick (though somewhat digital-feeling) steering, a composed ride not easily upset by frequent midcorner bumps, and heavy enough battery regen that you hardly ever have to touch the brake pedal. The instant torque vectoring is the Nevera’s greatest asset on this less-than-ideal canyon road; combined with its quick steering and tenacious grip, it doesn’t so much as claw its way out of a corner like a gas-powered hypercar would, but instead almost twists the Earth beneath it.

With time quickly winding down, we take a twisty road that dumps the Nevera back to PCH so we can retrace our steps back to the dealership in time for the car’s date with what could be a future owner.

It’s quite hard to form a solid conclusion on the Rimac Nevera based on our drive—it’s more of a taster from your Croatian craft brewery than an actual pint—but we’ve sampled enough to get us excited for more seat time in the future.

Ignoring the manufacturer’s big, bold claims, the Nevera still seemingly offers hugely promising technology wrapped in an engaging hypercar form. Even if the Rimac Nevera somehow isn’t the quickest car we’ve ever tested (once we can actually strap our testing equipment to one), it seems poised to live up to the company’s mission: to prove an electric hypercar can be not just as exciting and fun as its conventional compatriots, but actually more so.