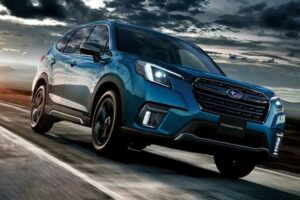 It feels good to be right all along. Specifically, we’re talking about correctly predicting that the next Subaru model to adopt a Wilderness trim will in fact be the 2022 Forester. How do we know this for certain sans confirmation from Subaru and before the car is even out? Because the Environmental Protection Agency (EPA) just released fuel economy data for the upcoming Forester Wilderness, spoiling whatever mystery there was left around the newest Wilderness’s identity.

It’s not actually that much of a surprise though. After looking at the first teaser shot of the upcoming Wilderness and doing a little sleuthing of our own, it became pretty clear the Forester was next up for Wilderness treatment. We aren’t sure exactly what that entails yet, but the off-road conversion will no doubt be similar to that in the Outback Wilderness.

That means more ground clearance, some extra body cladding, new paint, special wheels, off-road-centric tires, and a rework of some of the Forester’s off-road software. We also know that Subaru’s 2.5-liter boxer four-cylinder engine is going to slot under the hood of the Forrester Wilderness. In the Forester it currently makes 182 horsepower and 176 lb-ft of torque.

According to the EPA, the Forester Wilderness will get 25 mpg in the city, 28 mpg highway, and 26 mpg combined. Just as the Outback Wilderness fuel economy compares poorly to that of regular Outbacks, the Forester’s EPA estimates are notably worse than the regular Forester’s 26/33/29 mpg. A different final drive ratio, a taller ride height, and more aggressive tires are likely all contributing factors to the worse fuel economy. Will the upgrades to the Forester Wilderness make it worth taking the hit to your gas mileage? We’ll find out soon enough when the rest of the new Subie’s info drops.