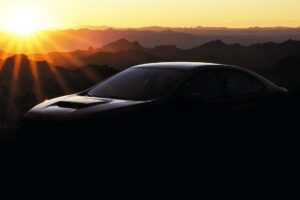 Fans of turbocharged, all-wheel-drive, rally-bred compact sport sedans have seen their options dwindle over the past decade from, well, two icons—the Mitsubishi Lancer Evolution and Subaru WRX—to one, the Subaru WRX. At least the most recent WRX was a good performance bargain, even if it lacked the outright titillation of earlier models. Could the next-generation WRX up the ante? One thing’s for sure: we know it’ll keep its signature hood scoop. Credit a teaser photo of the new rally rocket.

Curious about the new Subie’s reveal timing? So are we—the automaker is sharing only that the new WRX will debut “this year.” We’re about halfway through 2021, so there might be a wait ahead, even though from the photo above, it appears as though the new WRX sedan has taken physical form with at least a passing resemblance (in profile, at least) to the Viziv Performance and Viziv Performance STI concept cars.

As for what’s beneath the WRX’s hood scoop … well, that also is unclear at this point. Past reporting pegged the WRX as getting a new FA-series 2.4-liter flat-four engine, with the more powerful WRX STI model possibly spitting out as much as 400 hp. If the new 2.4-liter is at all related to the same-size turbo engine available in the Subaru Legacy, Outback, and Ascent, it could put out a similar 260 hp in the new WRX. It’d likely take a serious overhaul to throw down 400 ponies.

Today’s WRX uses a 268-hp turbocharged 2.0-liter flat-four, while the STI uses the company’s long-serving EJ 2.5-liter flat-four pushing as much as 341 hp and 330 lb-ft of torque from the crankshaft. It’s entirely possible the 2.4-liter engine outmuscles its predecessors’ states of tune in the new WRX and WRX STI, but we’ll need to wait for Subaru to reveal more official info, including whether the WRX range will once again be available only in sedan form (as in the photo above) or if the wagon/hatchback model will make a comeback for 2022.