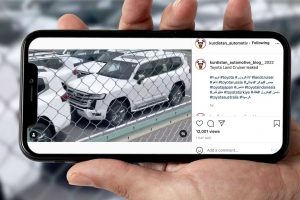 The current Toyota Land Cruiser J200 has been around since 2007, and it’s high time that we see a major revamp for the full-size SUV.

Good thing, the next-generation model is already out on the horizon with various leaked information, images, and this time, video, coming out showcasing the SUV’s new design. While we’ve previously seen the supposed Land Cruiser’s production form uncovered in spy photos, Instagram’s kurdistan_automotive_blog uploaded a spy video of a bunch of LCs parked in an open space.

The location where these resting next-gen Land Cruiser units were spotted is unclear, but based on what we saw in the embedded post above, they seem like right-handed models.

What’s clear, however, is the design that the Toyota SUV bears. The U-shaped opening below that underlines the massive front grille is more prominent, while the squinty headlights flank the chrome grille for a single chunk of mass on the fascia.

We’re not entirely sure what to feel about this design, though, considering that a humble MPV sold for the ASEAN market (look up Toyota Innova) bears a similar face.

Then again, I’m pretty sure a lot of you dear readers will agree that Land Cruiser buyers aren’t exactly choosing the nameplate because of aesthetics. Its esteemed capability when tackling unchartered roads has given it quite a reputation, as well as the authoritative aura it brings to the table, especially in some parts of the world (hello, politicians).

As for the powertrain setup, the 2022 Land Cruiser will reportedly adopt a twin-turbo 3.5-liter V6 as its base engine. A hybrid version of this power plant will also be allegedly available, while a 3.3-liter turbodiesel V6 will arrive in other countries.

We’re expecting a 2022 launch for the next Toyota Land Cruiser but as always, we’ll be on our toes for any latest update.