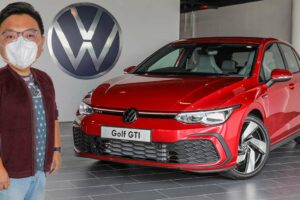 The locally-assembled Volkswagen Golf Mk8 will soon be launched in Malaysia. It’s expected to debut within the first three months of 2022, and prospective buyers can look forward to either the R-Line or GTI variants.

Powering the R-Line is the carryover 1.4 litre TSI engine making 150 PS and 250 Nm. There is no longer a seven-speed dry clutch DSG, but instead, an eight-speed torque converter automatic (from Aisin) now drives the front wheels. This means a slightly slower century sprint, with the R-Line taking 8.5 seconds to reach 100 km/h, versus 8.2 seconds in the DSG-equipped Golf R-Line Mk7.5.

No word on pricing just yet, but since it’s locally assembled here in Pekan, expect prices to be a tad more competitive than before. When the CBU Golf Mk7.5 range was launched back in 2019, the 1.4 TSI R-Line went for RM166,990, while the GTI was priced at RM239,990. So, pick your poison!