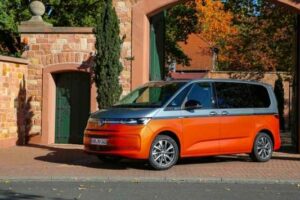 The new Volkswagen T7 Multivan is on sale and it can now be had with a diesel powertrain. The 148bhp 2.0-litre TDI unit joins as the fourth engine variant, sitting above the 134bhp 1.5-litre petrol TSI, but below the 201bhp 2.0-litre TSI and 215bhp 1.4-litre TSI eHybrid.

As such, the diesel also sits just above the 1.5-litre TSI in price, starting from £44,410 in entry-level Life specification. Like the rest of the Multivan range, the front-wheel drive diesel uses a seven-speed DSG gearbox. With the diesel now on sale, the full T7 Multivan range is now available to order with first deliveries coming to customers at the end of March.

Instead of being positioned as a direct successor to the T6 Caravelle, the T7 Multivan is being pitched as an all-new model which will also replace VW’s Touran and Sharan MPVs. However, the facelifted T6 – the T6.1 – will continue to be built as a commercial vehicle. Both models will be complemented by the all-electric ID. Buzz. This change in positioning means that the Multivan has been brought bang up to date, with a tech-packed interior and new running gear, including plug-in hybrid drive.

The van-based MPV is available from £43,160 for the 134bhp 1.5 TSI Life model. Standard kit on Life trim includes 16-inch alloys, dual power-latching sliding doors, a 10-inch infotainment system and VW’s Digital Cockpit TFT dials. Active safety tech such as Front Assist and Lane Assist also features. Next comes the diesel model which ranges from £44,410 to £56,300 for the long-wheelbase Style version.

Spec your T7 Multivan with the 201bhp 2.0 TSI petrol engine and prices will start from £58,130 as it’s only available in the Style specification. This adds kit such as VW’s IQ. Light LED matrix headlights, sat-nav, park assist, fully electric sliding doors and an electric tailgate with an easy-open function; 17-inch alloys are also included.

Finally, the 215bhp plug-in hybrid model. Priced from £48,835, it brings equipment such as a Harmon Kardon sound system, privacy glass, a panoramic glass roof and 18-inch alloys. The eHybrid set-up uses a 1.4 TSI turbo petrol engine and an electric motor to make a combined 215bhp – in similar system to the Golf and Passat GTE, while the 13kWh lithium-ion battery will deliver electric-only running for around 30 miles.

On the outside, the new Multivan has styling that falls somewhere between the Golf and VW’s range of ID electric models, with a slender grille and standard LED headlights, a relatively smooth nose, clean body panels and a new horizontal tail-light design. Narrow A-pillars are intended to improve forward visibility, while the large glass area will make for a spacious feeling interior.

Inside, VW has updated the seven-seat interior layout. There are now five individual chairs – so the Caravelle’s big, heavy three-seat bench is no more – and the chairs themselves are up to 25 per cent lighter than its predecessor’s. As in the Caravelle, the seats are able to slide back and forth thanks to floor rails, the two middle row seats can be rotated through 180 degrees, and there’s a multi-position table located between them.

The Multivan’s completely flat floor means that the table can now be moved all the way forward to between the front seats. An optional panoramic glass roof is available for the first time, too.

Tech on board includes VW’s 10.25-inch Digital Cockpit dials, touchscreen controls and USB-C connectivity, while an optional head-up display is a first for a VW commercial vehicle. An integrated eSIM means that the Multivan is always connected, while sat-nav and connected services – as seen elsewhere in VW’s range – are available.

Elsewhere inside, the Multivan has an electric parking brake as standard, while all models have the DSG automatic gearbox. Eliminating the gear shifter and handbrake lever has created even more space in the cabin. There’s 469 litres of boot space in seven-seat mode and 1,844 litres with the rearmost row removed. The Multivan comes in two lengths, measuring 4,973mm and 5,173mm, and these models have maximum carrying capacities of 3,672 litres and up to 4,053 litres, when fitted with panoramic glass.

While the T7 Multivan offers improved passenger carrying ability, it’s not currently slated to form the basis for a new range of California campers – these will continue to be based on the T6.1 Transporter van.

Safety kit follows that of other MQB-based models, with City Emergency Braking, road sign and lane assist offered, while the Multivan also features Car2X, a system that allows local communication with other vehicles and highway infrastructure to warn of possible hold-ups and delays. 360-degree cameras and IQ.DRive Travel Assist semi-autonomous driving are also available.