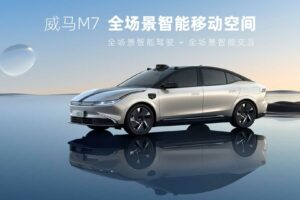 WM Motor, also known as Weltmeister, may sound German, but it’s actually a Chinese electric vehicle startup founded in 2018. The manufacturer offers four fully-electric models, including the W6, the EX5-Z and the EX6 Plus has now revealed its most interesting model to date, the M7, its fifth offering.

What’s special about the M7 is the fact that the manufacturer states it is Level 5 autonomous driving-capable. By that they mean it can’t actually drive itself continuously and safely with the driver not paying attention to the road ahead, but with the right software to back it up, it could. Its makes have fitted the M7 with three LiDAR sensors, among many other sensors that it comes with.

According to the manufacturer, it has a total of 32 sensors (the three LiDARs included) of which 5 are millimeter-wave radars, 12 are ultrasonic radars, seven are high-resolution cameras, 4 surround-view cameras, and a precision GPS module. The M7 looks very similar to another Chinese sedan that relies on LiDAR, the XPeng P5, which cleverly integrates the two big sensors into its front bumper (where you might find the fog lights in some vehicles).

The more technology evolves, the closer it mimics life – this is precisely the philosophy and direction of the R&D behind the WM M7. In order to achieve a more life-like intelligent performance, the WM M7 is endowed with three major capabilities: enhanced perception, computation, and evolutionary potential. As such, we like to refer to it as ‘the world’s first all-scenario intelligent mobile space’

In the WM M7, one of the LiDARs is on the roof, right behind the windscreen where it looks like a roof scoop, and the other two are located on the front fenders just behind and above the wheels. What makes Level 5 autonomous driving possible in this vehicle is the use of Nvidia’s Driv Orin-X chips, which will also be used in vehicles from Nio or Volvo expected to debut in 2022.

The M7 is expected to debut in China sometime next year with an NEDC range of 435 miles (700 km). Not much else is known about it right now, such as powertrain specifics or price, but these will be announced next year closer to the vehicle’s market debut.