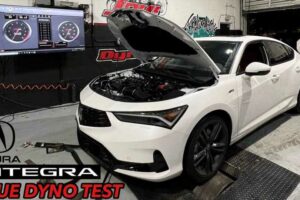 You probably know how the German brands typically underrate their engines, right? Well, they’re not the only ones as Acura has now been caught “lying” in the best way possible. Honda’s luxury division has rated the much-hyped Integra revival at 200 horsepower and 192 pound-feet (260 Newton-meters) of torque. As with all automakers, the numbers apply to the output delivered by the turbocharged 1.5-liter engine at the crank.

The folks over at AHC Garage wanted to put those numbers to test and strapped onto the dyno a brand-new 2023 Acura Integra A-Spec Technology Package with the six-speed manual gearbox. After three back-to-back dyno pulls, the sporty liftback produced 199 hp in the last run, thus virtually matching what’s written in the specs sheet. However, the power delivered during the dyno test was available at the wheels, so factoring in an approximate 10-percent drivetrain loss, the four-pot should be good for roughly 220 hp at the crank.

As far as torque is concerned, the highest number was achieved during the first run when the L-series engine generated 200 lb-ft (271 Nm) at the wheels. It’s a healthy increase over the figure provided by Acura at the crank. Of course, there’s always room for improvements, especially since enthusiasts feel like the Integra should pack more punch than the Civic Si. It remains to be seen whether a hotter Type S and/or Type R will follow to address this issue.

In an ideal scenario, the upcoming Civic Type R with over 300 hp will spawn an equivalent Integra, but for now, a little over 200 hp should suffice for the base model. At $36,895 MSRP, the 2023 Acura Integra A-Spec Tech Package represents a compelling package and a solid alternative to the BMW 2 Series Gran Coupe in the front-wheel-drive 228i flavor.

As a refresher, there’s a Honda-badged Integra for sale in China where it’s nothing more than a Civic sedan with some mild styling changes compared to the global model.