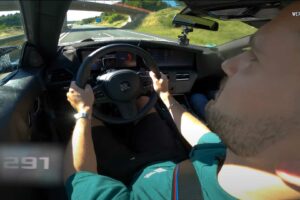 The BMW M2 won’t debut until this October, but BMW has been eager for people to drive it. We took it for a spin last month, and so did others. A new Daniel Abt YouTube video shows the high-performance coupe blasting down the German Autobahn at a blistering 181 miles per hour (292 kilometers per hour).

BMW might be eager for people to drive it, but it’s not as eager to divulge all the performance details, like how long it takes to hit 60 miles per hour (96 kilometers per hour). However, the video does show the M2 hitting 181 mph with ease on the Autobahn.

BMW will route the car’s power through a standard six-speed manual gearbox. The automaker’s eight-speed M Steptronic automatic transmission will also be available. The M2 will also raid the M4 for its brakes and active dampers, too.

The M2 will be wider than any other 2 Series variant thanks to its bulging fenders, and it should look much more aggressive than the M240i sitting in the stables. BMW uses carbon fiber throughout the vehicle for the seats and paddle shifters. BMW also uses the material for the roof, which helps cut the car’s weight and lower its center of gravity.

BMW continues to hide the coupe under a camouflage wrap, so we still have something to learn about the new model. The new M2 is a big milestone for the automaker, as the model will be the brand’s last ICE-only M model. BMW M will transition to producing hybrids and electric vehicles like the rest of the industry.

There are still three months until the big reveal, but we don’t know how much BMW will have left to share. The new M2 will go on sale next April, and we’re curious if we’ll see any hotter variants arrive later. We hope so.