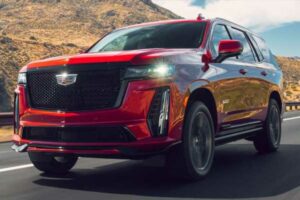 Look, the 2022 Cadillac Escalade is excellent. It’s always had presence, but Cadillac’s shored up the weak bits over successive generations. Power, ride, handling? They’re all now potent and/or class-appropriate. Luxury interior trimmings? Not just good for a GM product, but good period. And speaking of periods, we’re about to enter a new one in which internal combustion engines are taking a back seat to electrified performance. To highlight the Escalade’s transformation into the vehicle it always should have been, now comes the version many of us have always (and loudly) wanted: the 2023 Cadillac Escalade-V. We just drove it in long-wheelbase ESV trim and, oh boy, it’s something special.

What “V” Stands For

Its engine is the headliner. This eight-cylinder salute to excess, a 6.2-liter behemoth breathed upon by a 2.65-liter TVS supercharger that pours on 10 pounds of boost, creates a 682-hp inferno underhood. There’s 653 lb-ft of torque, too—and these numbers exceed the already staggering figures provided by the CT5-V Blackwing’s related powertrain. These are barbarous stats, at the hairy edge of good sense and societal responsibility, and the vessel that contains them is a massive slab of steel and aluminum that strains the asphalt at a claimed 6,407 pounds—190 pounds more than the short-wheelbase model that we’ll drive soon.

Its size, mass, and presence dwarf its V Series stablemates, and it also has a very different mission. The V and Blackwing V versions of the CT4 and CT5 aim to please their drivers. The Escalade-V aims to awe the driver and passengers and their neighbors and onlookers and nearby wildlife and, well, just about anything else with a set of eyes and ears. It’s the most powerful full-size SUV around, and it never lets you forget it. “This is something to brag about,” Escalade product manager David Schiavone said.

What Will Escalade-V Owners Brag About?

How about its 0-60 mph time? That’s the first thing that comes to mind when you’re in an SUV-measuring contest, right? No disappointment here, as Cadillac claims the Escalade-V ESV we drove will rip to 60 in just 4.5 seconds. The incredible thing is, that’s not enough for entry into the elite tier of quickest-accelerating SUVs, but for something this massive there’s no shame in where it lands on the list. The lighter short-wheelbase model is a tenth of a second quicker.

The fact of the matter is, the Escalade-V is quick, and feels it. Boot it and the big Cadillac surges off, surfing on a fat torque wave that starts way down low, achieving some high double-digit speed before you realize you should probably back off. But there’s not much drama beyond the burly noise emanating behind you and a vague sense that something rather extraordinary happened. Without the context of, say, saguaro cacti whizzing by, it might seem anticlimactic. Use the Escalade-V’s abilities to launch around a minivan cruising at sub-limit speeds in a short passing zone and it seems much more impressive.

The Escalade-V team spent a long time getting the noises right, and the result is a bold, bassy tone that rises to a yowl as you rev it out, punctuated by the 10-speed auto’s quick stab-shifts as the Escalade-V gathers speed. It’s a bit more subdued than the CT5-V Blackwing—whose “Scarface” exhaust system’s mission statement was to “frighten small children”—especially cruising in overdrive on the freeway, in which case the sound fades away and the Escalade-V’s excellent sound deadening and throbbing, bass-heavy AKG sound system (36 speakers!) can shine. Dip into the accelerator and the burble is back, appropriately aggressive for stoplight part-throttle scoots. Let off in V Mode and it’ll release a staccato cackle of fast, sharp pops that seems to go on a little too long.

Several of Escalade-V’s engineers told us that the biggest challenge on this monster SUV wasn’t the brakes, or dumping heat out of the engine, but rather getting the exhaust routed. Escalade-V engineers insisted on equal-length headers, but an intrusion on one side of the engine bay meant they had to get creative. The solution was a loop on one side—a 360-degree turn in the piping just aft of the headers—to get the needed length. There’s a little more backpressure here than on the CT5-V Blackwing, but we think it only improves the overall sound quality.

Out on a winding mountain road high above the desert floor, what matters is how quick the Escalade-V feels, and whether you can stop and turn all its mass before a dramatic physics experiment takes place. Here’s where the fourth-generation Magnetic Ride Control (MRC), recalibrated air suspension, and appropriately sized six-piston Brembo front brakes need to shine.

And they do. The Escalade-V is firmer than a regular Escalade without being punishing, and provides handling that doesn’t (and shouldn’t) hide the sheer size of the vehicle. It feels secure and confident at entertaining velocities. That’s no small task. A well-calibrated steering system helps immensely, with noticeable gradations in effort between drive modes. There’s no artificial heft to simulate sportiness here—just smart, direct, accurate steering that provides a surprising amount of predictability and feedback.

Does the V Fix the Ride?

Roll control was one of several challenges that Cadillac engineers faced when adapting the Escalade-V for the increased performance provided by its big, blown V-8. The air springs provide great ride height adjustability but don’t help any with lean, dive, or squat. Here Mike Symons, chief engineer on Escalade-V, and his team took advantage of the increased capabilities of the fourth-gen MRC dampers, including the new accelerometer that allows the computers greater insight into what the damper is doing and more flexibility in making proactive adjustments. Floor it and it’ll stiffen the rear to prevent squat and the right front to prevent engine torque-induced twist. In practice, that means stable (but not lean-free) cornering with little drama, even if there’s rough pavement  in the middle of the turn. There’s some squat under full acceleration, but it’s appropriate and not excessive—same with heavy braking. MRC is an amazing technology.

But MRC can’t revise the laws of physics, and the Escalade-V rolls on big, 22-inch wheels. It’s hard not to conclude that they are a hindrance in terms of ride quality. Twenty-inch wheels will clear the brakes, and perhaps it’d be easier for the MRC to control less unsprung mass, and for more tire sidewall to provide some cushion. As it is, the Escalade-V is comfortable around town, even in the MRC’s stiffer settings, but a lot of little imperfections make themselves felt. At least it’s not significantly worse than a regular Escalade despite the stiffer overall tuning, even in Tour mode.

The power and performance befit a V badge. Does the rest of the $152,990 package? The exterior enhancements are subtle; the interior is basically Sport Platinum carried over whole cloth. Not to complain, necessarily; the regular Escalade’s upper trims are very nice. And Cadillac reps told us that workshops showed that a hypothetical Escalade-V buyer wouldn’t want a boy-racer interior, with carbon-backed sport buckets out of a Blackwing and red stitching everywhere. That squares with what common sense informs us about the target audience. Surely six hundred and eighty-two horsepower and some revised exterior styling add enough value on top of the already nice Sport Platinum grade? This is more a well-appointed Q-ship than an SUV-shaped supercar, and that’s fine.

Add to the mix that this is a “limited” vehicle (how limited, Cadillac wouldn’t say) and that there are several accessory packages to personalize the Escalade-V in the works, and buyers should be able to make theirs look special without resorting to the aftermarket. Stay tuned, too, for potential variants, perhaps to celebrate the upcoming 20th anniversary of the V line. So, even as Cadillac has finally given us the brash, boundary-pushing, and excellent Escalade-V we’ve always wanted, it’s already thinking about how to give us more. Sounds pretty appropriate for one of the world’s boldest SUVs, if you ask us.