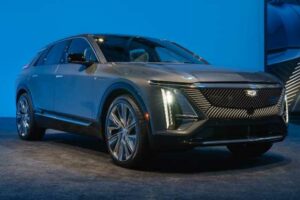 In case you haven’t been paying attention, Cadillac has made it clear that every vehicle it builds and sells will be fully electric-powered by 2030. So you can imagine how big of a deal its first-ever EV, the 2023 Cadillac Lyriq, is for the marque. The Lyriq is singing a different styling tune than the rest of its internal-combustion powered brethren, one the rest of the Cadillac lineup will be taking more than a few cues—no, not that CUE—from in the future.

To get more of a feel for the what the Lyriq is all about from a styling standpoint, we met up with the GM and Cadillac design braintrust in Los Angeles to see the electric SUV up close. They provided us a deeper look at Cadillac’s vanguard EV, which will be available to order on September 18 in advance of its rollout in the spring of 2022.

We already told you quite a bit about the 2023 Lyriq in our First Look. At the outset, the Lyriq will be propelled by a rear-motor powertrain with 300-plus miles of range; that’s with the base 100-kWh battery pack. A dual motor version will come later, as will V performance and high- style variations in line with Cadillac’s present product strategy. Output for the Lyriq is tentatively rated at 340 horsepower and 325 lb-ft of torque. (The torque figure is 440 in Newton-meters, the metric unit of measure Cadillac is using to drive its latest badging. The base Lyriq, then, has a “450” on its rump, as the torque is being rounded to the nearest 50.)

Let There Be Lights, Lots of Flashing Lights

But enough about range and power and motors—let’s talk about lights! Particularly the Lyriq’s wild, choreographed startup sequence that Andrew Smith, executive director of Cadillac Design, likens to the vehicle saying “hello” to you. And, boy, do you get one hell of a welcome. The Lyriq’s black crystal grille and Cadillac wreath flash to life first, followed by the horizontal turn indicators, the daytime running light strips (one of Cadillac’s carryover styling elements), and finally the vertical main LED lighting elements. Oh, and when you get out of the car, it does it all again, only the other way around.

We could maybe see it getting old after a while, but we’re betting those first Lyriq customers are probably going to wear themselves out doing that parlor trick for friends and family. We’ve seen automakers play with lighting elements before, although never to this extent. It’s the kind of thing you’re able to do when you have freedom to use the main grille area as more than just a cooling inlet, although there’s still a lower opening to provide cool air for the powertrain and to optimize airflow.

A broader point about the latter: Mike Simcoe, GM’s vice president of design who took over for Ed Welburn last year, said some 40 percent of the styling work was done to optimize airflow and minimize drag, extra important when you’re trying to move more than 5,600 pounds of crossover through the air. One of the key features Simcoe pointed out was the Lyriq’s rear spoiler, a passthrough design that not only improves aero but also made it possible for the team to eliminate a rear window wiper given how the air pushes down over the glass.

Lighting and airflow tricks aside, Lyriq represents a true pivot point in Cadillac styling, what Simcoe called, “a step change, a new form and new language.” Yes, there are flourishes that keep the 2023 Lyriq in touch with today’s Cadillac aesthetic, but Smith and his team had some fun with the electric SUV’s design, especially given how differently EVs are packaged than traditional internal combustion engine vehicles.

The Lyriq was Smith’s first go at a ground-up EV, and he’s fond of its body-side form, with its gently sloping rear canopy, slightly upswept element that flows gracefully over the rear quarter panel, and character line that bisects the crossover just above the flush door handles. Short front and rear overhangs and a decidedly rear-drive stance complete the look. It evokes a more elegant, lifted station wagon than Cadillac’s present, blockier-looking CT line of crossovers—far more art than science. The rear lighting elements also break hard with today’s Cadillac, framing the entirety of the hatch’s glass and augmented on each side by what Simcoe pointed out as a Mondrian pattern.

Lyriq Strikes a Chord Inside

While the exterior style is impressive, the 2023 Lyriq really shines inside, with its 33-inch, curved LED screen serving as the master of ceremonies. Crystal Windham, Cadillac’s director of interior design, emphasized that while similar in scope to the Escalade’s 38-inch panel, the Lyriq’s screen is a single, uninterrupted piece capable of emitting one billion colors (good luck counting them all). It’s a truly impressive driver-centric element that appears as if it’s floating on the dash. We didn’t get a chance to play with its features, but it’s clearly a digital tour de force.

Windham likened what the team did inside the Lyriq as creating “layers of discovery.” A mosaic of shapes and forms, colors, and texturing, all “artfully integrated with the technology,” as she put it. We’ll just call it super cool, especially the textured lighting elements in the door panel, the mesh metal speaker covers, the rings around the cupholders, and the flush-fitted door pulls. Given the Lyriq’s flat floor (a common characteristic of EVs) Windham was able to create an area that she said could easily keep purses stowed. In an artful use of space, above that sits a pull out cubby as well as a fold-down storage spot along the lines of a traditional glove compartment.

In addition to the main touchscreen panel, you can control the Lyriq’s functions via a dial in the center console area, while a band of HVAC buttons in the center stack area offer more traditional control. USB-C ports are available in the front and rear, and the center console has a charging pad for phones. Look up at the Lyriq’s roof and you’re treated to a massive panoramic glass panel. The 60/40 split rear back seat had copious legroom but six footers and up will be a little headroom constrained. While the white leather interior looked fantastic, there’s also an expressive dark trim as well.  Oh, and there are a couple of Cadillac crest Easter eggs to find. It’s a cabin that looks and feels premium, much like the vehicle as a whole.

Is All This Lyriq-ical Style Worth the Price?

Given its expected $60,000 starting price, color us impressed with what Cadillac’s team has done with the Lyriq from a styling standpoint. We’ll see how it performs from a dynamic and performance perspective, but if it’s anywhere near as impressive in those areas, Cadillac’s first EV is primed to be an out-of-the-gate success.