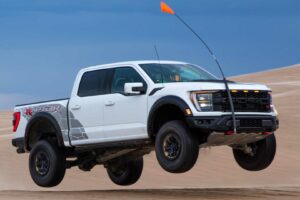 The 2023 Ford F-150 Raptor R is a direct shot at the Ram 1500 TRX. The two are nearly identical in engine power, and we now know that they also return similar fuel economy numbers. The US EPA has rated the Raptor R at getting 15 miles per gallon on the highway and just 10 mpg in the city. It has a combined rating of 12 mpg, the same as the TRX. The two return the same mileage in the city; however, the TRX is one mpg worse on the highway.

The supercharged V8 Raptor does get worse gas mileage than the cheaper and less-potent EcoBoost V6 variant. The non-R Raptor returns 15 mpg in the city and 18 mpg on the highway for a 16-mpg-combined rating. The EcoBoost V6 makes a lot less power, producing 450 hp (335 kW) and 510 lb-ft (691 Nm) of torque from the twin-turbocharged 3.5-liter engine.

Ram launched the 1500 TRX for the 2021 model year, dethroning the Ford Raptor as the meanest off-road pickup at the time. However, FoMoCo didn’t sit idling in the pit lane as Ram took a victory lap. The automaker got to work on upgrading the Raptor, slipping a recalibrated and tweaked GT500 engine under the hood. The result was the Raptor R that Ford introduced earlier this year.