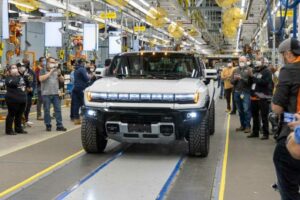 Back at the beginning of summer we reported that General Motors was experiencing difficulties ramping up GMC Hummer EV production and that they were being manufactured at a rate of just 12 per day, even lower than rival startup Rivian. And we haven’t heard anything since, although we imagine things have improved given that GMC apparently has some 90,000 orders for the new electric Hummer that it needs to fulfil.

The information was confirmed by GMC’s director of marketing, Rich Latek, who spoke to AutoBlog at the Detroit Auto Show. That’s a solid number and it shows there really is interest in the Hummer EV, even if many have criticized it for being too big, too expensive and not being especially good at being a work truck.

Latek added more context to the number saying that the number of orders that GMC has received for the vehicles has been growing from month to month and that the number referred to both the pickup and the SUV body variant. He went on to say that people are not only putting their name down for one of these vehicles, but most (around 90 percent according to the GM exec) are actually going through with the purchase.

GMC hasn’t even started manufacturing the Hummer EV SUV body style and it’s set to commence production in the first quarter of next year. The pickup that is already in production and has started reaching customers has been fairly well received, but it has been marred by an ongoing recall to fix faulty battery connectors that interestingly was initiated by dealers, not the National Highway Traffic Safety Administration (NHTSA).

According to the automaker, the high-voltage battery pack connectors can allow water ingress and corrode over time, eventually allowing water into the battery pack itself. The recall didn’t impact that many vehicles, since there weren’t many in customers’ hands to begin with, but around 424 vehicles were reportedly affected by this issue.

GM’s other (and arguably more important) new electric pickup, the Chevrolet Silverado EV, has also racked up a significant number of reservations – 150,000 reported in late July, up from just over 110,000 at the start of 2022. That is slightly lower than rivals from Ford, and the electric Sierra is a bit late to market, but it is expected to go on sale in the spring of 2023, at about the same time as the GMC Hummer EV SUV.