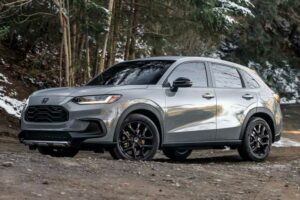 We rather liked the old Honda Fit-based HR-V, even if it was pretty poky. More power, a bit more space in the back, and a richer-feeling interior were all the little SUV really needed. On paper, the all-new Civic-based 2023 Honda HR-V resolves all those issues. But do the improvements elevate the experience overall?

As much as there is to like about the new HR-V small SUV, most folks will appreciate the interior upgrade most of all. Basically an adaptation of the wonderful Civic interior, it looks far more upscale than before and brings a great deal more functionality. The hidden vents in the decorative honeycomb trim are classy, the infotainment system is massively improved, and the center console’s been rearranged for far greater functionality.

We really want to drill down on the center console and armrest, because it was one of the least-liked aspects of the old model. Honda moved the cupholders from under your elbow to forward of the shifter, making them easier to reach and increasing the real estate for elbows. The passthrough shelf that was by your knees has been moved behind the shifter by your thighs, where it’s easier to reach. The USB ports, which were a massive pain to access, have been relocated to much more ergonomic positions. Pity there still isn’t a single USB port in the rear seat, and even the 12-volt outlet is gone.

We’re equally disappointed to report the folks in the back still don’t get air vents, either, but they’re not totally left out of the cabin updates. Legroom was never a problem, but the new platform and body opened up more hip-, shoulder-, and headroom in the back row, so it’s a more comfortable space to be. And although the trick-folding “Magic Seats” are gone, Honda makes up for the deletion with a larger cargo area behind the second row.

Go for a Drive

Honda’s decision to switch to the new global platform pioneered by the latest Civic sedan and hatchback was a smart move. We like the Civic an awful lot, and the HR-V compact SUV benefits mightily from the association. One turn of the wheel, and you immediately appreciate how good the chassis is. The HR-V rides nicer than most cars at this price point and handles better than most of them, too. The excellent body control resists pitch and dive and lean, and it handles bumps quickly and neatly, even when the suspension is already loaded up in a corner. Few people go looking at inexpensive compact SUVs for good driving dynamics, but the HR-V delivers anyway and is genuinely pleasant to drive.

Life in the Slow Lane

For as much as Honda got right on the new HR-V, the engine choice is all wrong. This 2.0-liter four-cylinder is a little more powerful on paper, but it’s pulling a larger, heavier vehicle. It should be no surprise, then, that the acceleration is abysmal. An unscientific stopwatch test showed we needed more than 11 agonizing seconds to reach 60 mph from a stop; if that result holds when we get to strap in our official timing equipment, the new HR-V would be at least 1.5 seconds slower than the old—and already slow—HR-V. Getting to 60 requires the CVT to run the engine up to nearly redline and stay there, which is a noisy place to be. People who live at altitude will spend a lot of time with their foot on the floor and the engine screaming like a giant blender.

The only good news here is that you don’t really notice the dearth of power as much when you’re moving. Our same unofficial stopwatch said the new HR-V is about as quick to execute a 45-65-mph passing maneuver as the old one, so the difference is in the launch. Getting around town and driving on the highway, the CVT reacts very quickly when you ask for more speed. Some people like to bag on CVTs, but this one is a hero. It gets every last bit of performance out of this underperforming engine.

It’s worth noting we were only able to drive loaded HR-Vs with all-wheel drive. A base front-drive model will accelerate differently, although it’s impossible to say if it’ll be quicker or slower until we test one, as it will depend on how much the all-wheel-drive system contributes to the initial launch from a stop.

More Fuel to the Fire

Being a bigger and heavier vehicle (by 100 to 300 pounds) with a larger engine means the HR-V’s fuel economy wasn’t going to go up, but it didn’t go down an awful lot on the EPA test, either, losing 2 mpg pretty much across the board. In the real world, though, you’ll be lucky to hit the official 26/32/28 mpg ratings given the heavy pedal required to keep pace with traffic from a stop.

For its part, Honda says it knowingly sacrificed a bit of fuel economy for more power and space, but given the performance we’ll call it a bad deal. The company refuses to say if there will be another engine option in the future, but we’re hoping like hell for the Civic’s 1.5-liter turbocharged four-cylinder or a hybrid powertrain.

As this is ostensibly an SUV and it does have all-wheel drive, we felt compelled to test whether it can actually leave the pavement, and the result was a surprising yes. None of the HR-V’s off-road stats are impressive, but take it somewhere its ground clearance can handle, and the all-wheel-drive system will get you back. Honda has reprogrammed the setup to send more power to the rear wheels sooner, and combined with solid traction control programming, we couldn’t get the new HR-V stuck on miles of muddy forest service roads. Sure, we scraped the bottom splashing in and out of some of the biggest mud puddles, but the SUV never struggled for grip in the slippery stuff.

The AWD system isn’t the only piece of technology Honda upgraded. Now, all versions of the HR-V get the Honda Sensing package of active and passive safety technologies as standard equipment. In addition to collision avoidance features, you also get fancy convenience items such as adaptive cruise control and lane keeping assistance that does a very good job of keeping the car in the center of the lane.

Inside, there’s now a half-digital instrument cluster that can be configured to show nearly a dozen different information screens. The other screen—the main infotainment display—has attendant knobs for volume and tuning, and they’re connected to a much-improved onscreen experience. It isn’t the best user interface on the market, but take some time to learn the system, and you’ll find an appreciable level of customizability.

All the extra stuff you get in this new model ain’t free. The base price has gone up, and with fuel economy going down, running costs will also increase a little (about $200 per year, according to the EPA). That’s a bit of a bummer, but the silver lining is you’ get a much nicer vehicle than before. It drives better, it has more space, it has a better interior, and it has a lot more tech. Inflation being what it is right now, it’s hard to get excited about an affordable car getting more expensive, but the 2023 HR-V delivers more than enough value to make up for the price increase.