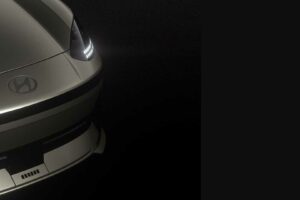 In a sea of crossovers and SUVs, it’s refreshing to see the good ol’ sedan has a future in the electric era. The Ioniq 6 couldn’t come any sooner, having been previewed in March 2020 by the gorgeous Prophecy concept. While it won’t look as sleek as the showcar before it, the teasers released in recent days have led us to believe the production model won’t be a bland three-box saloon. Come June 29, the design will be fully revealed.

In the meantime, Hyundai is sneaking in one final teaser image of its Tesla Model 3 competitor. It shows a good chunk of the front fascia with the pixelated LED daytime running lights and a smooth front bumper design to aid aerodynamics and achieve a greater range. Other previews have shown the Ioniq 6’s coupe-esque roofline and wide third brake light featuring the now-familiar pixel theme.

With more and more countries beginning to approve side cameras for road-going cars, the Ioniq 6 will also ditch the traditional glass mirrors. It should contribute to better airflow, further improved by door handles that will remain flush with the body when not in use. Of course, we’ve already seen these features on the Ioniq 5, which has a Cd of 0.288. Logic tells us the sedan will have a lower number since it won’t be as tall as the crossover.

Hyundai says only the full design is going to be presented tomorrow, so we will likely have to wait some more for the technical specifications. It is believed the Ioniq 6 has been stretched by two centimeters (0.8 inches) than originally intended for the sake of better aero. We’ve heard through the grapevine the bumpers have been fully redesigned as well for the same reason. To maximize range, a bigger-than-planned 77.4-kWh battery pack will be installed. Inside, the bezels of the digital instrument cluster and the infotainment’s touchscreen have been made slimmer compared to those of the Ioniq 6.

Series production at the Asan Plant in South Korea is reportedly starting in July, so the first deliveries to customers are expected to take place before the end of the year. At launch, the most expensive version will have dual electric motors, all-wheel drive, and roughly 300 horsepower.