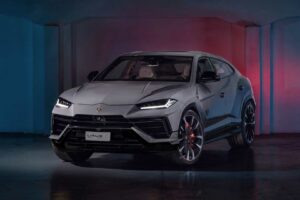 Lamborghini introduced the Urus facelift in August at Pebble Beach by showing the new-for-2023 Performante as the hotter derivative. However, the true replacement of the hugely popular Super SUV in its basic guise is this new S version. For the first time, Sant’Agata Bolognese will be selling two flavors of their LM002 spiritual successor. We’d argue it serves as a more subtle alternative to the Performante. Well, as subtle as a Lambo can be…

The Urus S gets the same upgraded twin-turbo 4.0-liter V8 engine making a devilish 666 horsepower and 850 Newton-meters (627 pound-feet) of torque. However, it lacks the Performante’s weight loss of 47 kilograms (104 pounds), so it’ll be slower. Indeed, Lamborghini says the Performante takes 3.3 seconds to reach 62 mph (100 km/h) whereas the S needs an additional two-tenths of a second. The top speed remains unchanged, at 190 mph (305 km/h).

With a sprint from 0 to 124 mph (200 km/h) in 12.5 seconds, the Urus S is no slouch among high-performance SUVs. Between the world premiere of the Performante and the S, the competition has intensified with Ferrari’s long-awaited launch of the V12-powered Purosangue SUV. These two will battle with other high-end products such as the Aston Martin DBX and the Bentley Bentayga Speed.

With the mid-cycle update, Lamborghini is making its best-selling product more customizable, including matte titanium 22-inch wheels and a diamond bronze 23-inch set. You can also opt for an exposed carbon fiber roof and matte or glossy black exhaust tips instead of the brushed steel finish of the newly designed setup exhaust.

Additional goodies introduced with the 2023MY include a standard stainless steel underbody element finished in matte black and a painted carbon fiber hood with matte black air intakes. Some of the optional trim can be had with the same dark finish or with carbon fiber in gloss or matte. Inside, there are fresh two-tone leather upholsteries and bi-color trim.

There’s still no word about a hybrid version for now, but Lamborghini has said it’ll electrify all its models by 2024. The Urus could get a plug-in hybrid setup derived from the Porsche Panamera Turbo S E-Hybrid, but nothing is official at this point.