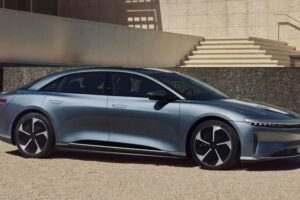 Lucid is expanding its Air lineup with two lower-priced trim levels, but neither skimp on range or power. The Lucid Air Pure is officially the entry-level model, but it still delivers over 400 miles of range and gobs of power at a five-figure price point. Stepping up to the Touring adds even more range and power for about $15,000 more.

Specifically, the 2023 Lucid Air Pure launches with a dual-motor, all-wheel-drive model priced at $92,900. That gets you a posh electric sedan with a slightly smaller 18-module version of the company’s long-range battery pack. In this case, smaller still means an EPA-estimated range of 410 miles on a charge. Fast-charge capability can reclaim 200 miles in 15 minutes, and drivers still have 480 horsepower (358 kilowatts) to play with. Lucid says it’s enough to send the all-wheel-drive Air Pure to 60 mph in 3.8 seconds.

We single out the all-wheel-drive model here because it’s available right away on the Air Pure. A single-motor, rear-wheel drive Pure will launch next year at an even lower price – $87,400. Details on power and range aren’t available yet, but it will be the only Lucid Air available in such a configuration. The automaker’s DreamDrive suite of driver assists is standard-issue, DreamDrive Pro is optional and the Air Pure also features an aluminum roof.

One step above the Air Pure is the Lucid Air Touring. Starting at $107,400, its dual-motor powertrain sends an ample 620 hp (462 kW) to the ground, slicing the 0-60 sprint to just 3.4 seconds. Interesetingly, it uses the same 18-module long-range battery as the Air Pure, but the EPA-estimated range goes up to 425 miles. The automaker says the Air Touring has the best driving efficiency of the entire Air lineup, clocking 4.62 miles per kilowatt-hour used.

Lucid also calls the Air Touring “the quintessential Air.” It wears the Pure’s aluminum roof as standard, though the Glass Canopy is an option. Higher-grade materials for the interior such as Nappa leather and wood trim are included at this trim level.

See all the news about the Los Angeles Auto Show

The 2023 Lucid Air Pure and Touring are available now to reserve, with deliveries commencing by the end of the year. All prices mentioned above do not include destination charges.