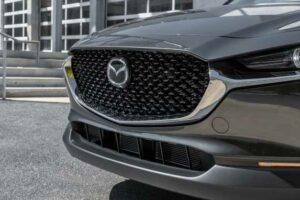 WHAT IT IS: With consumers still favoring SUVs, underdog Mazda wants to maximize its punch in a hugely competitive marketplace. The brand’s forthcoming CX-7 gasoline-electric hybrid SUV could be just the ticket. Built alongside the new 2022 Toyota Corolla Cross in Alabama, the reborn CX-7 will augment Mazda’s SUV lineup that currently includes the CX-30, CX-5, and CX-9. As you might expect, the new SUV will leverage Toyota’s highly developed gasoline-electric hybrid powertrain tech (which Toyota will apply to the Corolla Cross, as well).

WHY IT MATTERS: Mazda is a small player, so every vehicle in its lineup needs to pull its weight. The aging Mazda 6 sedan and cramped CX-3 subcompact SUV are going away in the United States, while the newer CX-30 crossover is earning its keep. Mazda is missing a fuel-sipping hybrid, though, a vehicle type it has recently avoided in favor of innovative internal combustion tech. But its Skyactiv-D turbodiesel was a short-lived disappointment in the U.S., and the complex Skyactiv-X spark-controlled compression ignition tech isn’t offered here. Because none of that R&D money is paying dividends in America, Mazda’s plan to leverage Toyota’s decades of investment in hybrid tech is a smart—and perhaps the only—play.

PLATFORM AND POWERTRAIN: Larger than its factory mate, which will ride on the compact Toyota TNGA-C platform, the Mazda likely won’t share the powertrains of the Corolla Cross. The 2.5-liter I-4 hybrid setup, found in the Toyota Venza, RAV4, and others, seems more likely. It will almost certainly not use Mazda’s e-Skyactiv-G mild-hybrid system, but it’s possible the new SUV could pair a Skyactiv-G engine with Toyota’s hybrid system, a concept the company explored some years ago but didn’t pursue.