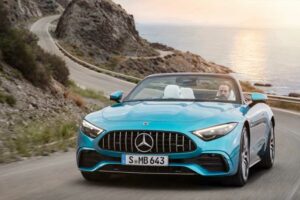 As manufacturers continue their trend towards using less and less gasoline, engines are becoming smaller and turbocharged to make up for the lack of displacement, as we’re seeing with the mighty-mite 2022 Mercedes-AMG CLA45. But turbos suffer a Catch-22 of sorts; want it to work better at lower rpm? You going to want a smaller turbocharger that can spin up faster—but that sacrifices ultimate power at higher rpm. Or go big with the turbo, make huge power up high, and suffer abysmal low-rpm or post-lift-throttle response. Superchargers and an exhaust-based anti-lag systems can deal with these issues, with trade-offs of their own. Mercedes-AMG has chosen door number three with its new SL43 roadster.

You see, AMG borrowed electric turbocharging technology from the Petronas F1 car, combining it with a 48-volt mild-hybrid electrical system powered by a generator on the accessory drive belt and slapping it onto the 2023 Mercedes-AMG SL’s new four-cylinder SL43 variant. An e-turbo like this one effectively disconnects the turbo’s compressor abilities from the speeds of exhaust gases while allowing finer control over the unit’s output, such that lag can be reduced at lower speeds without sacrificing big power at higher engine speeds. It’s as true of a transfer of Formula 1 technology to the street as you can get, and in a vehicle that Mercedes pegs as the “entry-level model” for “tech-savvy buyers” of the AMG SL family, which at launch here in America will include only the eight-cylinder SL55 and SL63.

A First For AMG, But Not *the* First

Technically speaking, this isn’t the first ever electrically driven turbocharger sold on a production vehicle. That honor belongs to Audi for its 2017 SQ7 and its triple-turbo TDi V-8. However, there is one distinction that AMG can tout over Audi: AMG’s turbocharger is both driven by the exhaust and the electric motor. Audi’s was electrically powered, mounted on the cold-side of the engine, and was limited to “just” 70,000 rpm.

The SL43 turbocharger’s 1.6-inch-thick electric motor is tied into the shaft that drives the compressor wheel by the turbine wheel. The AMG e-turbo can handle the heat from the exhaust, as it shares a coolant circuit with the 2.0-liter M139 I-4. Consider the electric motor and its associated electronics cooled. It can also handle the insane speed the turbocharger needs to make boost, as the little motor spins up to 170,000 rpm while being juiced by the 48-volt system shared by the mild-hybrid RSG belt-driven generator-starter motor unit.

Why Bother Electrifying a Turbo?

It’s not far off the torque range of the SQ7 TDI’s 2,000 rpm, either, but the triple-turbo diesel does make about 310 lb-ft less torque thanks to being half the size in both cylinder count and displacement as well as two-thirds less turbos. That being said, a gasoline engine also has a bit of a horsepower advantage over a diesel of equal size. The horsepower curve peaks at 381 hp at 6,750 rpm for the SL43’s M139 where the GM LSQ makes a measly 128 hp at 3,500 rpm.

While exhaust-based anti-lag systems exist and superchargers offer low rpm hp and torque gains, each comes with a tradeoff that gives the more complex e-turbo an advantage. The anti-lag systems that use the exhaust typically pollute more and are hard on the catalytic converter internals. A supercharger requires power from the engine to shove air into it for boost, sapping some power in the process.

If A Supercharger Draws Power, Wouldn’t RSG Do So, Too?

Now, before you argue that recharging the 48-volt system requires the MGU on the engine to sap some power via the drive pulley, keep this in mind: the MGU only introduces load on the engine when it’s recharging that lithium-ion battery or supplying power for the 12-volt system. Other than those times and when it starts the engine or provides it with a 14-hp boost (yes, the RSG is a power-adding device, as well), it’s decoupled. This has been an operation of 12-volt alternators for a long time, where the alternator is only active and drawing engine power when needed, and freewheels when it isn’t.

Though, there is another innovative part to the RSG and is something Mercedes has included in its mild hybrids. While in “Eco” mode, the car can enter into “Gliding Mode.” By utilizing the RSG’s belt-driven MGU as a motor so the car can maintain speed while saving gas. When you are at a cruising speed and your foot is off the throttle, the RSG system will turn the engine off but maintain drive by switching the MGU to traction motor mode, driving the crankshaft which is driving the input shaft of the transmission. This means that SL43 owners will potentially save fuel by having the engine off under low- to no-load situations. And there we were worried SL43 customers might be getting pinched by high gas prices…

Clicking Off The Gears

This gives the MCT 9G better throttle response as the heavy torque converter increases the inertia required to drive it, while the transmission itself enjoys shorter shift times and quicker downshifts via those electronically actuated clutches. It also enables AMG to include a “Race Start” launch-control function, which allows the SL43 to sprint to 62 mph from a standstill in just 4.9 seconds.

Since all SLs gave up their metal folding hardtops in the 2022 redesign, the SL43 also gets a fabric roof, just like the V-8 models. We’re not complaining, as the move slimmed down the SL line by 46 pounds. In fact, the use of aluminum, magnesium, composites, and steel more broadly keep the SL43 to just under 4,000 lbs. Even as the body only weighs 595 pounds, its torsional rigidity is up 18 percent. Transverse rigidity is up 50 percent versus the GT Roadster and longitudinal rigidity is up 40 percent over the outgoing model. In short, this is going to be one very planted AMG roadster.

The body is not only stiffer but also features many aerodynamic tricks. First is the active air control system AMG calls “Airpanel,” which uses horizontal louvers behind the grille. Only when the certain components have reached a certain temperature mark do these louvers open to allow air to pass through. The SL43 also features an active and retractable rear spoiler and optional aerodynamic parts such as a larger rear diffuser, larger “flics” on the front and rear bumpers, and aerodynamically optimized (and lightweight) aluminum wheels in 20- and 21-inch diameters. The 20-inch wheels also feature plastic aero rings for further aerodynamic enhancement and reducing weight over a metal version.

This All Sounds Good, When Can I Get One

Yeah, about availability in the U.S… “Please note the Mercedes-AMG SL43 is currently still under consideration for the U.S. market,” is what Mercedes tells us. For now, we’re only getting the SL55 and SL63, which are slated to reach our shores and dealers “in late spring.” However, with a new 49-mpg fleet CAFE standard coming down from NHTSA and starting with an eight-percent increase as early as 2024, now might be the time for Mercedes to consider bringing the SL43 to our shores.