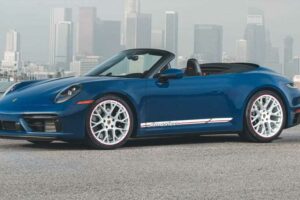 In 1952, Porsche released a special version of its 356 sports car called the 356 America. It was built specifically for the US market, and 70 years later we have another Porsche aimed squarely at the US of A. Paying homage to that original 356 as well as the United States is the – deep breath – 2023 Porsche 911 Carrera GTS Cabriolet America Edition.

One doesn’t build a car for the States without injecting it with plenty of red, white, and blue. It certainly makes for a colorful appearance package, and it starts with a shimmering coat of Azure Blue 356 for the exterior. At a glance the wheels appear white with a red lip, but there’s also silver on the outside surfaces. Porsche says it’s the first time different finishes have been used on a single wheel, and naturally, you’ll find exclusive America graphics on the sides. If you look a bit further up, you’ll see a black windshield frame instead of body color. Porsche says that’s also a first for the current 911 generation.

Moving inside, the red-white-blue color scheme continues with contrast stitching that alternates between Guards Red, and Pebble Grey. Speaking to media prior to the America’s launch, Porsche explained that a pure white color on the otherwise dark interior was simply too bright. That’s not to say the red seat belts aren’t bright, but you get the idea. Even the shift stalk for the seven-speed manual gets a red pattern and digits in the knob. Special door sills commemorate 70 years of America Roadster models of which there are only three. Aside from the original 356 and this one, Porsche offered a 964-based America in 1992.

As this is an appearance package, the powertrain is standard-issue 911 GTS. That’s not a bad thing, as it means 473 horsepower (353 kilowatts) going to the rear wheels through the manual transmission. It’s the only powertrain Porsche will offer for the America, sticking to the concept of an open-air, enthusiast-focused sports car. The automaker’s PASM Sport suspension is standard, as are the Sport exhaust and Sport Chrono Package.

Spearheaded by Porsche Exclusive Manufaktur and brought to life over a two-year period, the America Edition is technically an option for the Carrera GTS Cabriolet but only 115 will be made for North America. Nearly all will go to US dealers – 100 to be specific – with the remaining cars going to Canada. The exceedingly rare car has a starting MSRP of $186,370, including a $1,450 destination fee. It will reach dealerships in late 2022.