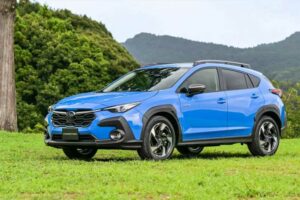 The 2022 North American International Auto Show is in full swing but Subaru decided to officially introduce the new Crosstrek at home in Japan rather than in the Motor City. With the third generation, the small crossover has lost its “XV” moniker used in certain markets, meaning it’ll be globally known as the “Crosstrek” going forward. It has retained the Subaru Global Platform (SGP), but with a series of refinements for a more comfortable ride.

Compared to its predecessor, the new model’s body is more rigid by using a full inner frame structure following the technique implemented in the Levorg and WRX. The upper body and underbody structures are no longer assembled separately, allowing the suspension and engine mounts to better iron out road imperfections for a smoother drive with fewer vibrations felt through the cabin.

While the rugged exterior styling is more along the lines of an evolution, the interior has been significantly revised to accommodate the new infotainment system. It uses the same 11.6-inch touchscreen with portrait orientation as we’ve seen in other recent Subarus but without the fully digital instrument cluster you’ll find in the JDM-spec Levorg or WRX S4.

The 2023 Crosstrek gets redesigned seats for improved comfort by offering better support and a revised structure to reduce shaking. Engineers also installed new sound-deadening materials while making tweaks to the dual-pinion electric power steering and the latest EyeSight safety tech. With the third-gen model, the crossover has full LED headlights as well as LED cornering lamps – a first for a Subaru.

Subaru is tight-lipped about the technical specifications of the powertrain, only saying the JDM-spec Crosstrek gets an e-Boxer setup with a 2.0-liter gasoline engine and an electric motor. We do know tweaks have been made to the ICE and gearbox to reduce vibration and noise.

The third generation will initially go on sale in Japan next year before heading to other markets.