2023 Toyota 4Runner SUV celebrates its 40th with some stripes 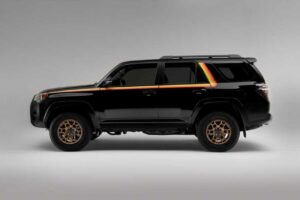 Toyota celebrates the 40th anniversary of the 4Runner SUV not with a new model, but with some yellow, orange, and red body graphics. The special edition on the aging SUV will be limited to 4,040 units for the U.S. market, the automaker announced Tuesday.

The 2023 Toyota 4Runner mostly carries on in the same manner as the 2022 4Runner, which hasn’t changed much since the last time the seven-seat SUV was redesigned for 2010. Celebrating the 4Runner’s shared heritage with the Hilux pickup truck, the 40th Anniversary special features stripes that check down from the C-pillar and make a sharp turn at the beltline before running up to the standard LED headlights. The stripes are also reminiscent of “The More You Know” public service announcement from the 80s.

The special SUV also sports bronze 17-inch alloy wheels, a throwback grille, and special badging on the liftgate. The badging and the bronzing carries over inside with some cross-stitching on the synthetic leather seats and shift knob. The package adds some color and a panoramic sunroof to the base SR5 trim, but it’s only offered on four-wheel-drive models. The SR5 Premium, TRD Sport, TRD Off-Road, TRD Off-Road Premium, Limited, and true TRD Pro carry over mostly unchanged into the 2023 model year.

The 4Runner honors the classic SUV cues straight from the factory with standard LED fog lights, an integrated hitch and wiring harness to tow up to 5,000 lb with its tried-and-true 4.0-liter V-6. The lone engine option makes 270 hp and 278 lb-ft of torque, and a five-speed automatic sends power to the rear wheels with a limited slip differential. The ground clearance reaches to 9.0 inches on rear-wheel drive models, but four-wheel drive models have 9.6 inches of clearance as well as off-roading tech such as hill descent and ascent control.

Despite its age, every 2023 Toyota 4Runner comes standard with safety systems such as automatic emergency braking, adaptive cruise control, lane-departure warnings, and automatic highbeams. New for 2023, blind-spot monitors come standard as well. A 3-year/36,000-mile warranty with two years or 25,000 miles of scheduled maintenance is also standard.

Pricing will be announced closer to the early summer on-sale date.