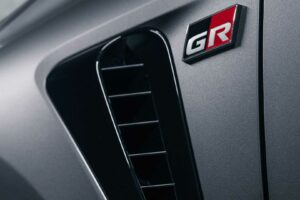 Rumors of a GR Corolla have been swirling around the Internet for close to four years, but it’s only today Toyota will give its compact hatchback the Gazoo Racing treatment. Oddly enough, the company has refrained from revealing the car’s identity, but the blink-and-you’ll-miss-it teasers have suggested it’ll be related to the immensely popular Corolla.

The “Toyota Performance Product Reveal” is happening tonight when everyone expects to see Japan’s answer to the Volkswagen Golf R. Much like the hot hatch from Wolfsburg, the GR Corolla will have all-wheel drive judging by the adjacent “GR-Four” script. It won’t be the brand’s only AWD performance hatch since the not-for-America GR Yaris has been around for a while.

Speaking of which, the feisty supermini could share its beefy three-cylinder engine with its bigger brother. It has been widely reported the GR Corolla will inherit the turbocharged 1.6-liter gasoline mill from the GR Yaris. The subcompact hatchback offers 268 horsepower at home in Japan while the European version has to make do with 257 hp.

An educated guess tells us the 2023 Toyota GR Corolla will be just as powerful, if not even stronger since it’s a bigger and therefore heavier car. Much like its kid brother, we’re expecting a six-speed manual to channel all that power to both axles. On a related note, an eight-speed automatic transmission is currently in the works for the GR Yaris. However, it’s too soon to say whether it will eventually be adopted by the GR Corolla as well.

Expect copious amounts of torque considering the GR Yaris already packs 266 pound-feet (360 Newton-meters) on the Old Continent. Much like the horsepower, Toyota’s engineers could tweak the three-pot to extract a tad more torque to match the GR Corolla’s additional heft. In fact, the JDM-spec GR Yaris not only has more horsepower than its Euro counterpart, but also a bit more torque, at 273 lb-ft (370 Nm).

The GR Corolla will join an expanding sports car lineup that also includes a GRMN Yaris. A hotter Supra is likely only a matter of time and rumor has it the BMW Z4’s sister car will finally get a manual gearbox.

Of course, the crown jewel of the Gazoo Racing portfolio will be the 1,000-horsepower GR Super Sport hypercar, provided it’s still happening…