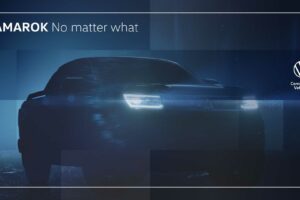 Rarely has a model gone through so many changes from one generation to another, so it’s important to point out that the 2023 Volkswagen Amarok will have practically nothing in common with its predecessor. Based on the latest Ford Ranger and built by the Blue Oval, the midsize truck is celebrating its world premiere following a painstakingly long teaser campaign. The current ute has been around since 2010, so it’s high time for a revamped model.

The official previews have led us to believe it’ll have its own visual identity, but we’ll have to see the big picture to figure out whether the Ford DNA has been minimized. For what it’s worth, the huge vertical infotainment inside is not something VW would typically do as the touchscreen is the SYNC 4 setup in disguise, measuring a stately 12 inches.

From the technical specifications released thus far, we know the new VW Amarok double cab will be 5,350 millimeters (211 inches) long and is going to carry around a 3,220-mm (127-in) wheelbase. The most affordable ones will make do with 17-inch wheels whereas the fanciest of the lot will have massive 21-inch alloys. The expensive trim levels are getting matrix LED headlights and as many as 30 driver-assistance functions.

Customers will get to pick from rear-wheel drive, part-time 4×4, and full-time 4×4 configurations, along with four- and six-cylinder engines. The largest powertrain is a torquey 3.0-liter V6 TDI, and in some markets, there’s going to be a four-pot gasoline mill. Road-oriented Aventura and off-road-focused Panamericana trim levels have already been announced to spice up the Amarok’s lineup.

Ford will assemble the T6.1-based 2023 Amarok at its factory in Pretoria, South Africa, but VW is keeping the original truck in production in Pacheco, Argentina to cater to South American markets. A plug-in hybrid variant of the new truck is expected to follow, while a purely electric derivative is under consideration for both trucks. The Ranger has already received the Raptor treatment, but it’s unclear whether there will be an equivalent Amarok R.