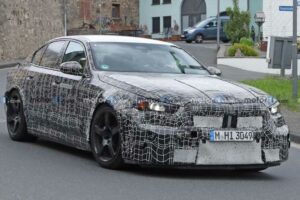 You’d better get used to seeing M prototypes with stickers saying “hybrid test vehicle” because the M2 G87 debuting in October will be Bavaria’s last performance model to do away with electrification. Everything after it is going to be electrified in some form, with BMW M workshop manager Hans Rahn telling Australian magazine Which Car earlier this month that the M5 will boast a plug-in hybrid powertrain.

He also said it will retain the V8 engine, and was most likely referring to the recently introduced twin-turbo 4.4-liter unit carrying the “S68” codename. In the meantime, our spies got up close and personal with a prototype of the M5, which didn’t have all the production body panels in place. The beefy wheel arches look tacked on and don’t have the final look, but they do indicate how much wider the M version will be compared to the regular 5 Series.

Those rudimentary headlights and taillights are placeholders and will be replaced by something much fancier on the production-ready M5. However, the cluster shape and placement are unlikely to change, so only the innards will be different. Looking as if it was glued to the road, the work-in-progress M5 had fuel caps on both rear fenders to confirm it’ll be a PHEV.

As if the quad exhaust system wasn’t a telltale sign we’re dealing with an M5, the giant brakes at both axles reiterate we are looking at the cream of the crop in the 5 Series family. Despite the heavy camouflage, the prototype is giving us the impression BMW’s design team has decided to go with a sharper look for the 5er.

Interestingly, BMW decided to hide the Hofmeister kink under an extra layer of camo but it didn’t do a great job at masking the iDrive 8 infotainment as we can see the side-by-side screens in some of the shots taken at the Nürburgring.

It could have way more power (and possibly weight) compared to the current car. In its most athletic guise, the super sedan packed a mighty 627-hp muscle in the M5 CS, but adding an electric motor could up the power ante to 650 hp to match the base version of the upcoming XM. It remains to be seen whether the M5 will also get the more potent V8 PHEV setup of the XM with a colossal 750 hp.

The standard 5 Series will break cover in 2023 when it will be joined by a virtually identical electric i5. Our money is on a 2024 release for the M5.