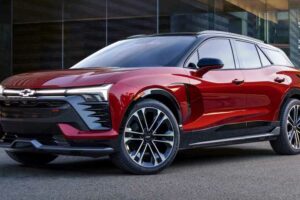 Chevrolet announced the Blazer EV in January, teased it in March, and today provided our first full look at the upcoming crossover. We won’t have to wait long for the model’s full rundown and reveal. General Motors CEO Mary Barra took to Twitter to also announce that it would introduce the model on July 18.

We first heard of the Blazer EV at CES in January, when the brand announced the Silverado EV and the Equinox EV. The new Blazer EV will ride on GM’s Ultium EV architecture that will underpin several vehicles from Chevy and its sibling brands. The architecture puts the batteries in the floor, giving GM a scalable skateboard platform to use throughout its lineup.

While Chevrolet hasn’t detailed the powertrain specs, we expect the Blazer EV to offer between 250 and 300 miles (402 and 482 kilometers) of range. That’d put it in direct competition with the Ford Mustang Mach-E, which offers up to 314 miles (505 km) of range.

However, Chevy hasn’t been coy about this EV wearing the coveted, high-performance SS badge. We don’t know what that means for the new Blazer. Power often comes at the expense of range in electric vehicles, but if might need to do that if it’s competing with the likes of the Mustang Mach-E, with the GT trim delivering 480 horsepower (357 kilowatts) and sub-4.0-second sprints to 60 miles per hour (96 kilometers per hour).

The new image shows off an attractive crossover that wears a distinct design that separates it from the gas-powered Blazer. The proportions look a tad wonky, but we’d pin that on the angle of the photo. The black greenhouse and black accents around the bottom pinch a deep dark red exterior color that covers the curvy sheetmetal.

There’s a large divot in the door where it meets the front fender, and that’s where the charging port lives. Chevy teased it back in March, showing the charge door closing automatically after removing the charging cable. The video also revealed SS badging on the wheels.

Thankfully, we have just over a month before Chevy reveals the new Blazer SS EV crossover. It will go on sale next spring, but it’s unclear if it’ll have a staggered rollout for the trims. We hope to get all those details when it officially debuts on July 18.