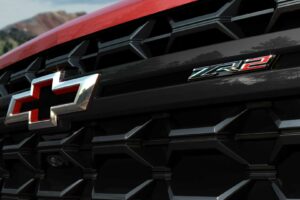 The Chevrolet Silverado HD ZR2 is happening. The automaker confirmed as much in its announcement for the updated 2024 model, casually mentioning that ZR2 was coming to the lineup. In addition, we received the above teaser photo showing a gnarly grille with a red-trimmed Bow Tie and a ZR2 badge in full view.

Unfortunately, this is all we have from Chevrolet at the moment. There’s no indication of when the ZR2 will be fully revealed, though we do expect it to be a 2024 model. Production for the refreshed Silverado HD won’t begin until sometime through the first half of 2023, so there’s plenty of time for Chevy’s PR machine to tease the truck and pull the covers before production begins.

This is all we know from Chevrolet officially. Unofficially, we heard back in March 2022 that such a beast was coming. It obviously won’t be an appearance package, as Chevy reserves the ZR2 moniker for its upgraded off-roaders. In this instance, it’s rumored to ride on 35-inch Goodyear Wrangler MT tires. That also means an upgraded suspension, likely wielding better shocks not unlike the Silverado ZR2. Skid plates, locking diffs, and tweaked bodywork for better approach and departure angles are certainly possible.

In the meantime, we have the standard Silverado HD that’s significantly updated for 2024. The new digital interior is the big story here, as it gains a 13.4-inch touchscreen in a new center stack. It’s canted slightly towards the driver, who also has a 12.3-inch digital instrument readout that’s configurable to suit specific preferences. The new dash still offers plenty of analog knobs and buttons for common-use features, and in the tech department, the heavy-duty Chevy gets enhanced adaptive cruise control for use with trailers.

The 2024 Silverado HD makes its public debut this week at the State Fair of Texas. Expect to hear more on the Silverado ZR2 in the weeks to come.