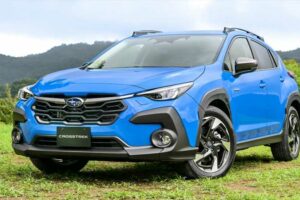 After a pointlessly mysterious tease, the new third-generation 2024 Subaru Crosstrek compact SUV has finally been officially revealed—well, sort of. For some reason, Subaru has decided to only show off an early prototype of the new Crosstrek, and the one they revealed is designed for the Japanese market, so we’ll have to wait a bit longer for details on what’s coming to the U.S. eventually. The automaker isn’t even sure if the new SUV will be ready to go on sale by next year, saying it could be introduced later in 2024. But hey, the news is out now, and while mostly minor upgrades, the new Crosstrek does get new paint colors and more body cladding, a larger infotainment screen, and enhanced safety features.

Subaru is clearly playing it pretty safe with the design of the 2024 Crosstrek, as it’s not a dramatic departure in the looks department from the vehicle currently on sale. It keeps the same compact, wagon-like proportions, and like the recently-introduced new WRX sedan before it, there’s more body cladding with more rugged materials trimming the exterior bodywork, like around the wheels and the fog lights. Subaru says it wants the design to come across as both nimble and tough.

Based on the provided measurements, it seems as though the overall size and wheelbase of the Crosstrek is unchanged, but there’s been a slight reduction in ground clearance, now listed as 200mm, or about 7.9 inches, compared to the outgoing model’s listed 8.7-inch clearance. It’s likely that the new Crosstrek will get the brand’s symmetrical all-wheel drive setup, but so far Subaru has only mentioned that it will get a e-Boxer hybrid powertrain with an automatic continuously variable transmission (CVT) for the Japanese market, which is likely a 2.0-liter H-4 direct-injection engine paired with a motor-generator unit mated to a small battery pack that’s typically mounted over the rear axle.

The higher trims of the new Crosstrek will be available with 18-inch wheels, and Subaru says there will be nine paint colors available when it goes on sale, including two new colors: “Offshore Blue Metallic” and “Oasis Blue.” The side-sills and lower rear gate trim now feature a mountain-inspired landscape texture, the headlights are now LEDs for all trims (and now include a cornering feature), and the roof-mounted EyeSight safety system’s cameras have been upgraded to expand their angle of view and have also improved upon their image recognition software.

Inside the 2024 Crosstrek isn’t all that dramatic, with a fairly dull, basic dashboard layout contrasted with a new 11.6-inch infotainment touchscreen (as seen in other models). Subaru also says it’s overhauled the interior storage cubbies to be more user friendly, and the 60:40 rear folding seats carry over for easy and efficient cargo capacity in the back. The front seats have been designed to “support and align the pelvis” and reduce rolling motions and swaying of the human body as the vehicle navigates corners and uneven roads, and the seat rails themselves are now attached directly to the vehicle’s frame structure, removing the traditional bracket mount that caused seat sway and increased vibrations. Subaru also claims its use of a new elastic adhesive in the roof paneling reduces vibrations and improves cabin noise damping.

Like the Levorg and new WRX before it, the new Crosstrek utilizes a full-inner-frame construction body design, where the entire frame is assembled first and stuff is bolted on after, as opposed to the more-standard construction method where an upper body frame and lower body have to be joined in assembly. The result of Subaru’s approach should be a more rigid, unified vehicle body, a slight reduction in weight, and improved overall handling and ride quality. Subaru also says a new collision subframe has been added to the chassis to help absorb front-end impacts.

Subaru will only say that the revised Crosstrek will go on sale in Japan first, “scheduled for 2023 or later.” Later than all of next year? That seems like a long wait. Maybe the semiconductor shortage or other supply chain woes are holding Subaru and the new Crosstrek back.