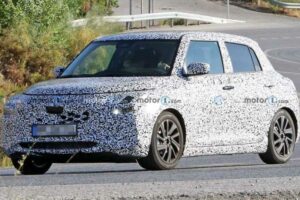 The current generation Suzuki Swift has been around for quite a while since it was announced in 2016. Since then, its tiny footprint has reached several markets globally except in the US where the Japanese company only sells motorcycles and outboard motors for marine vehicles.

It won’t be long before Suzuki introduces the next-generation Swift as it has been spied testing for the first time. Codenamed YED, this will be the fourth-generation model of the little hatchback, believed to be using a modified version of the Heartect platform in order to conform to more modern safety standards.

Suzuki has done quite a great job in concealing details of the Swift for its first outing. However, a closer look at the spy photos does reveal definite changes in the next-generation model, which appears to be sleeker than the current-generation model.

Up front, the hood presents a smoother mold compared to the outgoing model’s, plus the cutout of the bonnet itself differs from the A2L generation. A bigger and restyled LED headlamp configuration peeks through the concealment.

On the side, the next Swift appears to have a more swoopy roofline. The biggest change is with the rear door handles that are now placed on a more conventional spot, as opposed to the current model’s configuration that’s hiding on the C-pillar.

The concealments on the rear are thick on the spied prototype, though it’s evident that the next-gen model will have a more trapezoidal rear windshield. A set of revamped taillights is also expected plus there are now reflectors on the lower rear bumper.

Definite details about the powertrain are scarce at the moment, though it’s likely that a turbocharged 1.4-liter mild-hybrid setup will be used. An HEV version is also rumored to be in the works, which could come from Suzuki’s collaboration with Toyota. The Swift Sport will be introduced within a year after the standard version’s debut.

The next-generation Suzuki Swift will likely be introduced in 2023 for the 2024 model year, so expect more spy photos of the little hatchback while in its testing phase.