2024 Volkswagen Tiguan Spied Inside And Out In 31 Photos 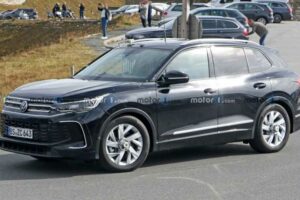 A swirling camouflage wrap can serve to obscure body lines and details underneath, but it attracts all the attention on public roads. Meanwhile, Volkswagen is testing its new third-generation Tiguan SUV with nary a glance from onlookers.

This prototype didn’t get past our spy photographers, however. VW has perfected the art of hiding in plain sight with the combination of black test vehicles wearing black tape and stickers that mimic the look of present-day models. That’s exactly what’s happening with this Tiguan, notably at the front. The grille and headlights you see closely resemble the current model but it’s just tape. Zooming in reveals different body lines underneath, suggesting slimmer headlights and a thin upper grille that could resemble the electric ID.4.

The next-gen Tiguan won’t be an EV, so it still needs air to help cool the engine. The lower grille will grow slightly in size, encompassing the entire lower half of the fascia. More fake stickers at the corners mimic the Tiguan’s current side vents, but we can see those will be squared off and more upright. The SUV’s entire front clip will adopt a larger, more chiseled appearance.

There’s more trickery at the rear with stickers used to hide slimmer taillights. The exhaust outlets in the bumper are also stickers, once again mimicking the current Tiguan’s design. It seems the next-gen SUV will have a less dramatic exhaust system that simply exits beneath the vehicle.

Of course, the fake sticker treatment only works if the overall shape is still a familiar one. On the outside, the new Tiguan retains its basic design but inside is a different story. We see an entirely new greenhouse with a center touchscreen no longer integrated into the dash. It looks like vents for the climate control are located underneath the screen, and digital gauges for the driver are deeply recessed. With the rest of the dash covered, sussing out other details is impossible.

Volkswagen isn’t ready to go all-electric just yet. The Tiguan is expected to launch with combustion power, likely a version of the current 2.0-liter turbocharged four-cylinder gas mill with diesel engines offered in Europe. Mild hybrid and plug-in hybrid variants are certainly possible at some point.

We expect the fake stickers to come off sometime in 2023, with the Tiguan debuting as a 2024 model.