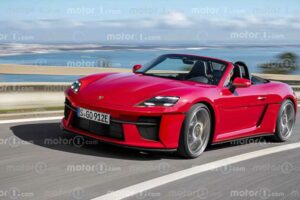 Porsche found a lot of success with the 718 Boxster and Cayman models, as a more affordable entry point for Porsche sports car ownership – some even prefer them to the iconic 911. Four generations on since the original, though, Porsche plans to radically change the two models’ formula and turn them into EVs, both which should debut by the middle of the decade.

The manufacturer has not shown any official teasers yet, but between the spy photos and speculative renderings we’ve seen, we have a pretty good idea what the model might look like. And in true Porsche tradition, it probably won’t look a whole lot different to the existing internal combustion-engined model, and it should be a lot like this new rendering provided by our colleagues at Motor1 Italy.

If you didn’t know the vehicle they were portraying was a electric, you wouldn’t really be able to tell. The front end has quite wide openings to allow air to go through (this is consistent with what we’ve seen in spy shots), making it look like a typical ICE vehicle, not an EV, although these will probably all be active and only open when the vehicle needs cooling.

The vehicle in the rendering also has intakes in front o the rear wheels. These are a Boxster trademark, but they are no longer needed to feed air to a mid-mounted boxer engine. Instead, they will supply cold air to cool the brakes or electrical components and they (just like the big front bumper intakes) will most likely be retained to keep the design recognizable and familiar.

The headlights will be less rounded, more angular for the 2025 model. They will be more Taycan-esque and they’re expected to feature the same four-dot LED daytime running light signature. For the rear, if Porsche follows the same design philosophy as it has done for most of its current models, then the electric Boxster will have a full-width light bar connecting its taillights – this isn’t shown in the rendering and it’s not especially obvious in the spy photos either.

Underpinning the electric Boxster (as well as the hardtop Cayman) will be a version of the Premium Platform Electric (PPE) that will also be used as a basis for the upcoming Macan EV. However, we expect the sports cars built on this platform to prioritize a low seating position (less important in a crossover or SUV), so they may have a special battery pack that will not only be mounted as low as possible, which will either go around the seats or sit completely behind them.

And in terms of power, the new electric Boxster and Cayman will have considerably more of it than today’s ICE models. Porsche did show the 1,073-horsepower Mission R Concept as a technical preview for the production models, but we don’t actually expect them to be that powerful – maybe there will be special versions with close to that output, especially since we’ve also heard rumors that Porsche is working on a Taycan variant with about that much power.