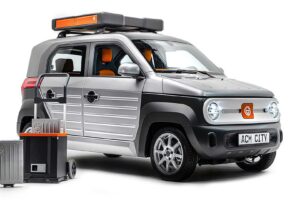 Targeting fleets, the City One could enter production in 2023 in Asia with an estimated starting price of €10,000.

Germany may have some of the world’s most successful automakers, but the EV revolution has allowed some startups to target niches of their own.

You probably have heard of Aachen-based e.Go Mobile, the maker of the Life city car, but there’s also a company from Munich that plans to build a similar EV. It’s called Adaptive City Mobility (ACM), and it will introduce its first product, the 3.6-meter (141.7-in) long City One electric car, at IAA 2021 in Munich next week.

Before dismissing it as yet another EV startup, you should know that ACM recently struck a deal with a Magna International business unit, which will provide the first phase of the series engineering development. Furthermore, Porsche-owned MHP is listed as an EV platform partner.

The City One embodies ACM’s vision of the second wave of e-mobility—universal access to affordable electric vehicles. Destined for the ride-hailing, taxi, sharing, tourism, or logistics sectors, it has a modular design that allows it to be converted from a car to a van in two steps.

In passenger car configuration, it can carry up to four passengers next to the driver; as a van, it can accommodate two passengers (including the driver) and a volume of up to 1,450 liters (51.2 cu ft), enough to fit a Euro pallet if desired.

The vehicle is also said to offer manual battery swapping that would only take three minutes. Furthermore, the renewable energy, which is stored and used in ACM’s battery swapping system, works as a range extender. An additional battery roof box will also be provided.

The system consists of 4 batteries with 2.5 kWh each, for a total capacity of 10 kWh. Each battery weighs 10.5 kilograms (23.1 lbs) and is no larger than a suitcase. Charging the batteries takes 8 hours at a household socket or 5 hours at a power plug.

The driving range is 240 kilometers (149 miles) and can be doubled in three minutes by swapping the depleted batteries with fully charged ones.