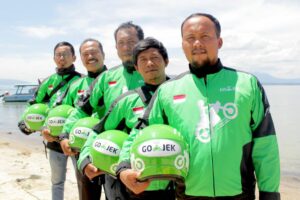 Now everybody cannot fly, so low-cost carrier AirAsia has been working hard to diversify. Now, you can order groceries and lunch from the company, just like you do with Grab. Soon, you’ll be able to book (luxury) rides from AirAsia as well – once again, that’s something synonymous with ASEAN superapp Grab.

The airline led by Tony Fernandes is making further steps to rival the so-called regional superapps. According to Nikkei Asia, AirAsia is now finalising discussions to acquire Gojek’s business in Thailand. Indonesian unicorn Gojek is Singapore-based Grab’s biggest rival in our part of the world.

Quoting sources with knowledge of the matter, the report says that an agreement with Gojek would be a step forward in AirAsia’s ambitions to grow its digital business. This move will give AirAsia a foothold in ride hailing.

The sale would also hint at how Gojek is reshaping its regional business following its May 2021 announcement that it will merge with Indonesia’s giant e-commerce platform Tokopedia. The new entity is called GoTo, a combination of the two names. Regulators have approved the proposed acquisition by AirAsia and the deal could be announced soon, a Malaysian government source told the Japanese publication. Another source with knowledge of the deal said it will be a share swap between Gojek and AirAsia, where Gojek takes stakes in AirAsia’s superapp business in return for its Thai operations.

AirAsia has been repositioning itself as a superapp, with Fernandes publicly stating his ambition to compete with Grab and Gojek. AirAsia Digital, which company’s non-airline businesses are parked under, already has food grocery delivery, courier services, an e-commerce platform and a payment gateway, but has so far lacked ride-hailing services.

The Gojek deal would change this and kickstart AirAsia’s food delivery business in Thailand. AirAsia Food is currently available in Malaysia and Singapore. The report mentions that GrabFood is the market leader with 50% of Thailand’s US$2.8 billion (RM11.64 billion) food delivery market in 2020. Behind Grab is Foodpanda and Line with 23% and 20% share respectively. Gojek’s GoFood had a 7% share of the Thai market.

AirAsia also has plans to launch a flying taxi service by 2022 – more on that one here.