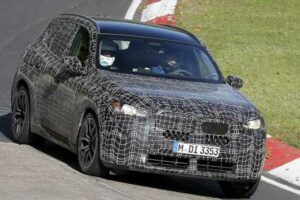 We’ve spotted the fourth generation BMW X3 testing once again – this time getting put through its paces on the famed Nurburgring circuit. The camouflage remains but we can still pinpoint key design details on BMW’s mid-size SUV. We expect this to be the last X3 to come with an internal-combustion engine, though there will also be all-electric variants.

As we’ve seen before, the front of this test car shows a larger kidney grille and an air intake beneath. The thinner headlight design looks like it’ll forgo the split style of the new BMW 7 Series and X7 and be more in line with the latest X1. We could also see a ridge in the bonnet from the BMW badge, a design trait used on the M3, i4 and XM.

The current BMW X3’s wheel arch profile looks to be carried over, along with the upswept window line to the rear pillar, creating the brand’s famous ‘Hofmeister kink’. Our spy shots show heavy camouflage around the rear lights, which we expect will be two separate units rather than a single light bar. These latest spy shots also show larger, diamond-cut alloy wheels. The lower bumper doesn’t have any distinctive features visible yet, but the roof spoiler at the back looks to have grown.

The current X3 was facelifted in June 2021 so we’re not likely to see the next-generation car revealed until the end of 2023, with an on-sale date of 2024. This arrival is an awkward time for BMW as the X3 would just miss out on the introduction of the ‘Neue Klasse’ platform scheduled to launch in 2025.

It means that the all-electric iX3 (based on the current X3) will stick around well into the next X3’s lifecycle. The new X3 will likely be based on an updated version of BMW’s CLAR platform, which accepts mild-hybrid, plug-in hybrid and pure-EV powertrains.

A mix of four-cylinder petrol engines and six-cylinder petrols with electric assistance are expected to make up the bulk of the range. The current BMW X3 M uses the same 3.0-litre turbocharged straight-six motor as the M3, and now we’ve finally seen the adoption of hybrid technology in an M car with the new BMW XM, don’t be too surprised if the X3 M follows suit.

We haven’t seen inside the next-generation X3 yet, but the infotainment system will surely be based on the latest version of the firm’s OS 8 operating system. It should be viewed on a curved display made up of a 14.9-inch digital instrument cluster and a 12.3-inch infotainment screen first seen in the iX and now on the facelifted 3 Series.

With the current BMW X3 starting from £45,585, it’s likely the new model will push nearer a £50k entry price tag when we see it go on sale in the UK in 2024, once again taking on premium rivals such as the Audi Q5 and Mercedes GLC.

Now read our in-depth review of the current BMW X3…