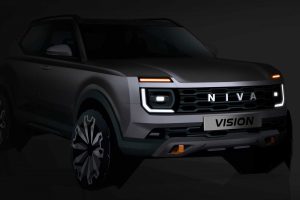 A second C-segment SUV will be launched in 2025.

Lada previewed an all-new Niva compact off-roader during the 2018 Moscow Motor Show and now the Russian manufacturer has finally promised the production model will debut in 2024, six years after the concept’s premiere. Lada believes the launch of the Niva will “open new horizons for the brand” and will help it expand its presence outside the Russian market.

Teased with a single sketch image, the new Niva is one of four new models the brand will launch by 2025. The company will continue “its transformation to become a world-class effective and competitive automotive manufacturer” and will deepen its relationships with Dacia. The two Renault-owned automakers will share a single platform, which gives us a good idea of what architecture the new Niva will use.

Basically, the off-roader will be based on the CMF-B, which should help Lada and Dacia generate significant synergies in the next five years. The single teaser image hints at a compact utility with strong character and design inspired by the original Niva launched in 1977. Of course, the final production model will feature a toned-down design but we definitely like what we’re seeing so far.

It’s important to note that the new Niva will be launched as a successor to the recently refreshed Niva Travel. The more rugged off-roader originally known as the Niva and launched in the 1970s is now sold under the Niva Legend moniker and is a more affordable and off-road-focused product.

In addition to the all-new Niva, Lada will also launch a new C-segment SUV in 2025.

END_OF_DOCUMENT_TOKEN_TO_BE_REPLACED

END_OF_DOCUMENT_TOKEN_TO_BE_REPLACED
We and our partners use cookies on this site to improve our service, perform analytics, personalize advertising, measure advertising performance, and remember website preferences.Ok