Alpha Wolf Debuts At Petersen Museum, In Production From Q4 2023 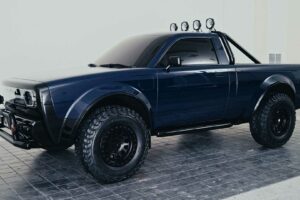 Alpha Motor Corporation finally has a prototype electric truck, but production is still a long way off.

For the first time since it appeared on the EV startup radar in December 2020, Alpha Motor Corporation has an actual prototype to show the world.

The company has debuted the first Wolf prototype at the Petersen Automotive Museum on August 24, where the electric pickup truck will remain on display through mid-November 2021. The Alpha Wolf is part of the museum’s exhibit “Alternating Currents: The Fall and Rise of Electric Vehicles,” which explores the history, development, and resurgence of electric vehicles.

According to Alpha Motor Corporation, the all-electric pickup truck will offer an estimated 250–275 miles (402–442 km) of range from a lithium-ion battery pack of an unspecified capacity. It will be available with a single-motor RWD system or dual-motor AWD system, with the latter capable of doing 0-60 in 6.2 seconds.

As for the all-important release date, Alpha Motor Corporation anticipates that the Wolf will enter production in the United States (the plant location remains a mystery) by the end of 2023. More information on test drives and deliveries will be released closer to production.

The estimated starting MSRP is $36,000 for the RWD model and $46,000 for the AWD variant, before federal EV tax credits and additional state EV tax incentives.