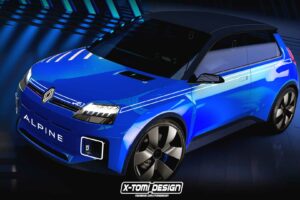 It won’t be hugely powerful, but we have high hopes that it will be really fun to drive.

Alpine, Renault’s revived sports car brand that has now been reinvented yet again to make sporty electric vehicles, will launch its first offering in 2024. It could be one of three vehicles, but according to a new report, it looks like it’s going to be a performance-oriented version of the upcoming Renault 5 hatchback.

Autocar tells us that the Renault 5 Alpine will have 215 horsepower (160 kW), quite a bit more than standard 5 whose motor is expected to make 134 horsepower (100 kW). Apparently, it will use a shortened version of the larger motor that will power the upcoming electric Megane.

The source quotes Renault’s head of engineering, Gille Le Borgne, who explained that

We derived the 100kW motor by shortening the length of the e-motor that we will use for the Mégane. It can go through the same production line and has the same technology but less copper and other elements, so it’s shorter. The final answer is yes, because we want to do Alpine cars, as you can imagine. By shortening the engine, it has the same global installation. We will need to adjust the track, because it will be more sporty on the R5 Alpine.

The motor will power the front wheels, but the vehicle will apparently come with torque vectoring and provide a very entertaining drive. Driver engagement seems to be a priority for the Alpine engineers and this makes us very excited to experience the finished product.

Furthermore, even though the back wheels won’t be powered, Le Borgne informs us that

In the rear, we will have a big surprise. We want to do torque-vectoring and really amazing handling performance, as you can imagine for an Alpine.

Once the R5 Alpine arrives in 2024, it will be followed by a dual-motor performance coupe-like SUV, as well as an all-electric replacement for the current Alpine A110, which is a Porsche 718 Cayman rival. And since Porsche is also working on an electric Cayman equivalent, the electric A110 will have a direct rival, although we don’t know when either will be launched yet.