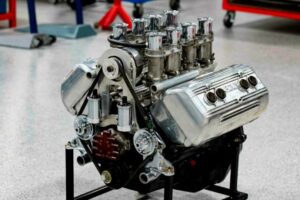 The Ford flathead V-8 engine changed hot-rodding forever. When introduced in 1932, the 221ci engine put out only 65 bhp, and even at the end of its production life in 1953 the larger Ford 239ci “flatty” was only making 110 bhp. Yeah, the 255ci in the 1953 Mercury was making 125 hp, but that’s still not a hugely impressive number. Previous four-cylinder engines had aftermarket overhead valve (OHV) conversions available, so it was only natural for the same idea to filter over to the flathead V-8.

Enter brothers Zora and Yura Arkus-Duntov and their Ardun Mechanical Corporation of New York. WWII kept them busy, but by 1945 those military contracts were drying up, so Zora went to Ford with their idea for a flathead V-8 OHV conversion. Ford passed, so Zora went ahead and, with the engineering help of George Kudasch, designed a kit.

What they came up with would become the pinnacle of flathead V-8 performance equipment.

Initially, the OHV Ardun heads were problematic, as they were very heavy, very large, and very expensive, thanks largely to the use of premium heat-treated 355-T6 Alcoa aluminum alloy—but they did produce between 25 and 60 percent more power, depending on the overall engine tune. Employing hemispherical combustion chambers with centrally mounted spark plugs, twin valve springs, high-chrome rocker arms, bronze valve guides, streamlined exhaust ports, and more, the exotic heads also inspired similar products later down the line from Stephens, Alexander, and others.

Rather than have the middle pair of exhaust ports asthmatically “siamesed” into one, the Ardun (a name derived from ARkus-DUNtov), breathed better through four equally spaced ports. It was also compatible with the Ford block and valvetrain, used the stock cam, and had the previously mentioned hemispherical combustion chambers, along with large intake valves for improved performance. Interestingly, the Ardun had short intake rockers and long exhaust rockers, and was developed in 1947, four years before the similar Chrysler Hemi engine’s debut in 1951.

The assembly was a foot wider than a stock flathead V-8 and added 60 pounds to the engine. It was also expensive, at $500, a hefty sum in the late 1940s. Zora was thinking that by 1949 the Ardun-equipped V-8s would be spitting out around 230 hp, but that number turned out to be fairly optimistic. After two years of testing the combo on his own GE dyno, the Ardun-equipped flathead V-8s were only putting out around 160 bhp. The install took six hours to knock out and, combined with the cost of the kit, this meant that sales never took off. Only 200 to 250 sets were originally made.

After the operation stopped, Zora went over to England, where he worked for Allard and continued to develop the parts. When Zora returned to the United States and went to work for General Motors his namesake invention was still around, but by the mid-50s had been eclipsed by a slew of OHV engines like the Chrysler Hemi, and another soon-to-be-iconic engine—the small-block Chevy. As fate would have it, Zora had a hand in the development of the legendary SBC and more than a little to do with the Corvette.

One of the most outspoken fans of the Ardun Head V-8 was Willie Glass, who set records at Bonneville with an Ardun engine, and the engine you see pictured here, which will be up for auction at Mecum’s Indianapolis event (May 13-21), was acquired from Glass. A Ford 239ci flathead V-8 Ardun OHV conversion, it was originally intended as a build for the Grand National Roadster Show. It features eight Weber carburetors, and was scoped by Evernham Motorsports. This historic mill would be perfect for your collection, or maybe even for your own hot rod project. To find out more about Lot S197 or to become a bidder, visit the Mecum Auctions listing.