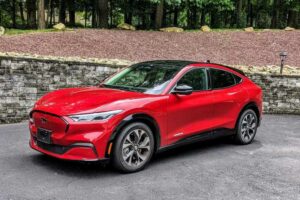 Ford stated the big reason for the relatively low production guidance is due to battery constraint concerns.

The Mustang Mach-E is arguably the most important car for Ford since the Model T. With the rise of electric cars, the auto industry is facing its first global transition since the time of the horse and carriage. Much like the Model T was a catalyst for Ford’s first mass-produced ICE cars, the Mustang Mach-E will serve as Ford’s rally cry for its foray into electric vehicles. Does the Mach-E’s early trajectory compare to something akin to what Tesla has experienced?

Before answering that question, let’s take a closer look at the numbers. Including its first production year, there have been 47,168 Mustang Mach-E’s built. There have been 15,832 sold in the U.S. while international sales figures have not yet been released.

Ford has opted to build the Mustang Mach-E at their Cuautitlán factory in Mexico. The plant previously made the Ford Focus along with a multitude of other cars over its five decades of operation. Initial production goals upon the launch of the electric Mustang Mach-E were set at about 50,000 cars for its first year of production.

A higher production capacity is possible given the size of the factory. That said, Ford has stated that a big reason for the relatively low production guidance is due to battery constraint concerns. As if battery constraints weren’t hard enough to deal with, the Great Chip Shortage of 2021 has caused another tough obstacle for the Mach-E’s upward momentum. Still, if Mach-E production plateaus for the rest of the year, at its current output Ford should still be able to make good on its goal of producing 50,000 vehicles.

So how does this all compare to Tesla? Some would point out that the Mach-E actually sold 6,614 units in its first quarter, a greater number than Tesla was able to do in its first quarter of Model 3 production. This news, however, should be no surprise as Ford has had over a century of mass manufacturing experience.

That said, once Tesla got through its infamous “production hell” related to Model 3, it leveraged its school-of-hard-knocks experience to roll out the Model Y far more smoothly. The Model Y is estimated to have sold over 16,000 units in its first quarter.

Regardless of the numbers, kudos to Ford for taking a chance on heavier production output with its Mach-E. Ford’s electric offering has been a viable alternative for those that want a non-Tesla EV. True — on paper, the Model Y is able to best the Mach-E on most specs (see below). And Tesla still boasts access to the sprawling Supercharger network. But soon, surprisingly, the Mach-E could gain access to it.

Another big advantage that the Model Y has is its autonomous driving features. While the Mach-E will be available with BlueCruise, allowing for hands-free driving on pre-mapped highways, it does not have the flexibility of a Model Y with FSD.

Software experience is also a big differentiator between the two companies. While Ford has been one of the first legacy brands to promise more substantial software updates, we have yet to see the full scope of what they are bringing to the table.

Battery and chip shortages notwithstanding, the EV community is hopeful that Ford will be able to make their Mach-E in higher quantities next year. After all, this will help expedite the auto industry’s transition to cleaner, greener electric cars.

An earlier version of this article appeared on EVBite. EVBite is an electric vehicle specific news site dedicated to keeping consumers up-to-date on any developments in the ever-expanding EV landscape. Revised update edited by EVANNEX.