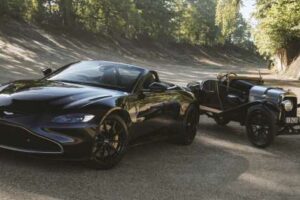 Aston Martin has been around since 1913, but what you might not know is that due to the outbreak of World War I, production did not begin in earnest until the early 1920s. Before that, the company built five prototypes, with the third, the “A3”, becoming the oldest Aston still in existence.

That car is now 100 years old, now owned by the Aston Martin Heritage Trust (AMHT) since it was donated back in 2002. To celebrate the milestone, longtime dealer Aston Martin HWM (Aston’s longest-serving dealer, apparently) teamed up with the organisation to commission a bespoke Vantage Roadster through Q by Aston Martin, Gaydon’s customisation arm.

Just three examples will ever be built, all featuring the same lovingly crafted design cues that hark back to that “A3” prototype. These include a black mesh grille with a bright aluminium surround and a gold badge featuring the original Aston Martin logo, as well as the silver side vents evoking the hand-finished exposed aluminium bonnet. Saddle leather straps and a “No_3” engraving on the vents enhance the association. Elsewhere, you’ll find bronze brake callipers hiding behind 20-inch gloss black forged alloy wheels. Inside, you’ll find classy fluted Obsidian Black leather seats with Chestnut Tan highlights, including the stitching and the embroidered Aston Martin script in the same font used on the “A3”. The gorgeous climate control knobs have also been cast from brass to mimic bits and pieces from the prototype, while the heritage logo makes another appearance embossed in the centre console leather.

Despite winning hillclimbs and lapping the worlds first purpose-built race track, the Brooklands Motor Circuit, at 136 km/h, the “A3” is certainly not fast by modern standards, powered by a 11 hp 1.5 litre four-cylinder side valve engine. It’s a good job, then, that the Vantage is a damn sight speedier – under the bonnet sits an M117510 4.0 litre twin-turbocharged V8 from Mercedes-AMG, churning out 510 PS and 685 Nm of torque. Paired with an eight-speed automatic gearbox, it enables the car to get from zero to 100 km/h in 3.7 seconds before reaching a top speed of 306 km/h.

The customised Vantage Roadster will make an appearance this Saturday, June 26, at a centenary celebration hosted by AMHT in Warwickshire, where it will be joined by the “A3” and a host of other historic machinery. All three units will be available to order through Aston Martin HWM, based in Walton on Thames.