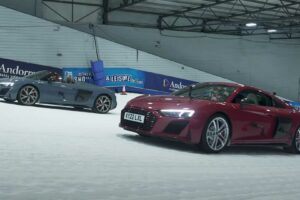 The Audi R8 isn’t the first car to come to mind when considering a winter vehicle. It has a lot of power and a low ride height, which aren’t great attributes for navigating snow-covered roads, especially with summer tires. That calculus changes with winter tires, and a new video from Carwow shows what a difference the right tires can make.

The channel pits the Audi R8 V10 RWD against the Audi R8 V10 Spyder with Quattro all-wheel drive. The Spyder has a big advantage by powering all four wheels, which is able to help push and pull the car in the slippery snow.

Both Audis pack the naturally aspirated 5.2-liter V10 engine. However, they have different outputs. In the heavier Spyder with Quattro all-wheel drive, the engine produces 620 horsepower (462 kilowatts) and 427 pound-feet (580 Newton-meters) of torque. It weighs 3,736 pounds (1,695 kilograms).

The first few races go about as well as one would expect. Neither R8 can get that far up the slope, wearing summer tires in a situation that calls for the best winters money can buy. Turning the stability control off does little to help, with neither two-door Audi getting much further than before, with the summer tires incapable of finding traction in the snow.

Things change when the cars switch to winter tires. Both are far more capable than before, easily reaching the top of the first summit. The all-wheel-drive Spyder is quicker at getting up the slope, but the coupe wasn’t left behind. The first race between the two with winters installed saw the RWD Audi get a better start than the AWD Spyder, but the Quattro system dug in, allowing the AWD Audi to pull ahead and win.

The video shows once again that winter tires do make a difference in the real world. They are designed to grip in the cold, and the results compared to summer tires are stark.