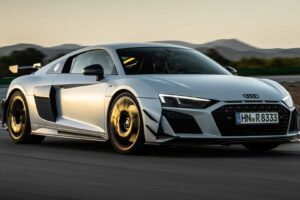 We knew it was coming, and now it’s here – prepare to meet the final Audi R8 with a combustion engine. The V10 era is drawing to a close as Ingolstadt is sunsetting the naturally aspirated 5.2-liter FSI with a hardcore version of its mid-engined supercar. It’s effectively the best of both worlds by combining the superior power of the Quattro model with the lighter package of its RWD sibling. In fact, more weight has been trimmed for the GT.

A follow-up to the namesake special edition from 2010, the new R8 GT offers 612 horsepower to perfectly match the Quattro model. The big difference here is that output is routed only to the rear wheels. In addition, a newly developed seven-speed, dual-clutch transmission delivers gear chances quicker than ever before. The maximum torque of 565 Newton-meters (417 pound-feet) arrives from 6,400 rpm.

For even greater performance, the engineers from Ingolstadt have managed to shave off 20 kilograms (44 pounds) compared to the standard R8 V10 RWD. The mid-engined coupe now weighs 1,570 kilograms (3,461 pounds) thanks to a diet that involved bespoke 20-inch forged wheels with Michelin Sport Cup 2 tires and ceramic brakes. Further contributing to the weight loss are bucket seats and a carbon fiber-reinforced plastic (CFRP) stabilizer bar at the front axle.

To visually set it apart from the other R8 versions, Audi has blacked out the Four Rings and the “R8 GT” badge at the back. A new aerodynamic body kit perfected in the wind tunnel and made from carbon fiber bridges the gap between the road-going model and the several race versions of the Lamborghini Huracan’s sibling. As a node to the original R8 GT, the finale comes painted in matte Suzuka Gray. Alternatively, buyers can opt for Daytona Gray or Tango Red metallic colors.

The black interior with red accents also harkens back to the 2010 R8 GT while an individually numbered plaque below the gear lever reflects the car’s limited availability. Indeed, only 333 will ever be made, much like the previous-generation special edition. Audi did sell the first R8 GT as a Spyder as well, but the new one is exclusively available as a coupe.