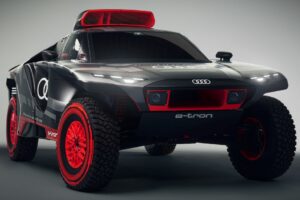 Audi Sport has officially begun testing the new Audi RS Q e-tron ahead of its debut at the upcoming Dakar Rally season, set to kick off in January 2022. With this, the four rings aims to be the first automaker to use an electrified powertrain to compete for overall victory against conventionally-powered rivals.

The Dakar Rally is an exhausting long-haul race like nothing else in the world of motorsports. It lasts for two weeks and the daily stages can see participants drive over 800 km at a time. “That’s a very long distance,” says Andreas Roos, responsible for the Dakar project at Audi Sport. “What we are trying to do has never been done before. This is the ultimate challenge for an electric drivetrain.”

Make no mistake – the RS Q e-tron is an electric off-roader. But since there are no charging opportunities in the desert, Audi will use its TFSI engine to charge the high-voltage 50 kWh battery (weighs 370 kg). Although not specified, the combustion engine is said to operate efficiently between 4,500 and 6,000 rpm, so consumption remains below 200 grams per kWh. The electric propulsion system uses two motor-generator units (MGU) take nfrom the current Audi e-tron FE07 Formula E race car. There’s one on each axle, and Audi says only minor modifications were made. The maximum system power is 500 kW (680 PS), though the final output is subject to regulation. A third MGU of identical design works with the TFSI engine for energy conversion.

According to Stefan Dreyer, Audi Sport motorsports development head, the battery pack is a proprietary unit that was created together with a partner. “As engineers, we basically see development potential in every component. But in terms of the drivetrain system, we have already achieved a system efficiency of over 97% in Formula E. There’s not much more room for improvement,” he explained.

“The situation is quite different with the battery and energy management. This is where the greatest development potential lies in electromobility in general. What we learn from the extremely challenging Dakar project will flow into future production models. As always, we are also working closely with our colleagues from road car development on this project,” Dreyer added.

Audi says the RS Q e-tron only needs one forward gear, and it is developing its own software for torque distribution. Doing this creates a virtual and freely configurable centre differential, thus removes the need for propeller shafts and a mechanical differential, further saving weight and space. The vehicle will now enter an intensive test programme until the end of the year.

Roos said: “This project’s schedule is extremely packed and challenging. Less than 12 months have passed since the project officially started. We had to begin the development while the regulations for alternatively-powered vehicles had not even been finalised yet. And all of the development took place during the Corona pandemic. You mustn’t underestimate that either. What the team has achieved so far is unique. The roll-out was a very special moment for everyone.”

Audi Sport managing director for motorsports, Julius Seebach said: “The quattro was a gamechanger for the World Rally Championship. Audi was the first brand to win the Le Mans 24 Hours with an electrified drivetrain. Now, we want to usher in a new era at the Dakar Rally, while testing and further developing our e-tron technology under extreme conditions. Our RS Q e-tron was created on a blank sheet of paper in record time and stands for Vorsprung durch Technik.”