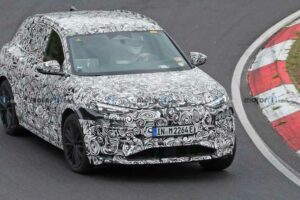 Audi continues to work on new electric vehicles to expand its EV lineup. There’s a new zero-emissions SUV currently under development and expected to debut before the end of the year. At a later date, possibly next year, it will be joined by a performance version, recently spied by our photographers on the Nurburgring.

This is, obviously, a heavily camouflaged prototype. Still, you can easily see a more aggressive front fascia compared to the other Q6 E-Tron test cars we’ve spied so far. Upgraded brakes hide behind the black alloys and there are surely more signs that this is a performance vehicle hidden underneath the camouflage.

There’s a mystery surrounding the RS version of this vehicle regarding the powertrain it will get. There are rumors about a 600-horsepower (447-kilowatt) electric system, consisting of two electric motors and a large battery pack. Different batteries and powertrain configurations are expected for the standard Q6 E-Tron.

The Q6 E-Tron is currently being developed together with the electric Porsche Macan and we know both models will come in several different versions depending on power and battery capacity. There are other rumors suggesting the Q6’s lineup could also include an S version to slot below the fully-fledged RS, but this can’t be confirmed for now. Its cousin from Stuttgart will also receive a performance model and it will be interesting to see what the differences between the two will be.

The Audi EV will wear a unique design, of course. Underneath the skin, the large SUV will ride on the Premium Platform Electric (PPE) architecture co-developed by Audi and Porsche. At best, the architecture can offer around 310 miles (500 kilometers) of range. The base models in the Q6 range will use a rear-mounted electric motor.

The standard Q6 E-Tron is expected to arrive towards the end of this year or during the first half of 2023. The RS version shouldn’t be delayed, which means it could arrive just a few months later. In the worst-case scenario, the debut could be postponed to early 2024.