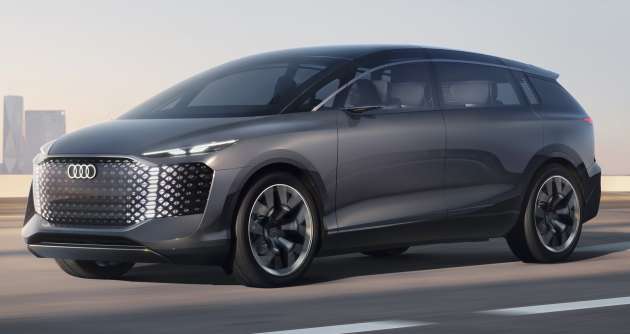 Eight months after the debut of its skysphere concept, Audi has completed the “sphere” trifecta of electric show cars with the unveiling of the urbansphere concept. As with the previous two (which also includes the A8-previewing grandsphere), this newest model is aimed at the upper echelons of society, this time with an ultra-luxurious MPV of sorts that is all the rage in China.

In fact, the urbansphere has been designed with congested Chinese megacities in mind, although Audi says the concept can also be applied to any other global metropolis. To that end, this four-seater lounge on wheels is the largest of the “sphere” cars, measuring a Toyota Alphard-dwarfing 5.5 metres long, 1.78 metres tall and 2.01 metres wide; its wheelbase is also a massive 3.4 metres long.

Like its other siblings, the urbansphere has been designed from the inside out, maximising interior space for each occupant. Entry and egress is facilitates by rear seats that pivot outwards when the doors are opened, along with a projected “red carpet” of light. Once inside, passengers are ensconced in large, highly-adjustable seats, with the pews at the back coming with leg rests and up to 60 degrees of recline. 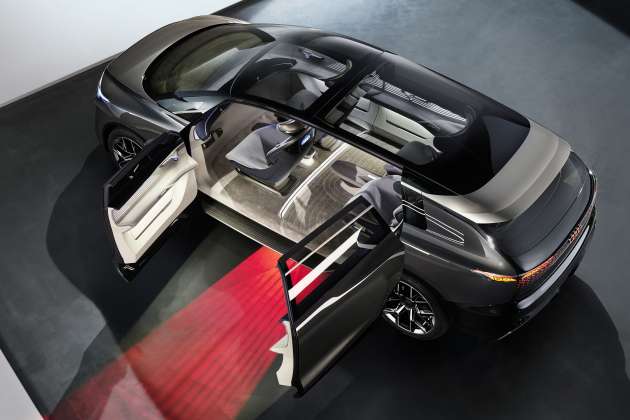 The seats can also be rotated so that all four passengers can talk to each other, while individual headrests speakers and a privacy screen help to shield the less sociable. Twin monitors are fitted to the backs of the front seats, along with a giant full-width, roof-mounted “cinema screen” for sharing; this transparent OLED display can be folded away when not in use.

Passengers can also enjoy the expansive glazing for a good view out, plus a stress detection function, a meditation app and large centre armrests – you can even get a water dispenser and glasses at the back. The seats are upholstered in wool and are padded using Econyl, a recycled polyamide, while the fabric used on the armrests and the rear cabin are made from bamboo.

All the front displays are hidden away when not in use, so that users can only see the hornbeam wood veneer surrounding the cabin. Once activated via touch, the screens are projected onto the front surfaces, showing either travel data, music or navigation. An MMI touchless response controller in the doors allows passengers to adjust various parameters using gesture control, even when reclined in their seat. There are even VR glasses hidden away in the doors, allowing for augmented reality journeys.

Occupants are freed from the need to drive the car thanks to Level 4 autonomous driving capabilities, although a steering wheel, pedals and a driver display can be unfolded for manual control. Audi says it is working with Volkswagen’s Cariad software subsidiary to bring the technology to market in the second half of the decade.

On the outside, the urbansphere has a one-box profile with a large, flat windscreen and a sweeping roofline. The latter is highlighted by a chrome strip that leads into the rear spoiler, intersecting the large L-shaped C-pillars. Prominent front and rear haunches hint at the quattro all-wheel-drive system underneath and accentuate the massive 24-inch motorsport-style six-spoke alloy wheels, which echo the ’90s Avus concept.

At the front, the entire width of the front end is lit up and used for communicating with the outside world, incorporating the octagonal “singleframe” grille graphic (the upper and lower edges are made from aluminium). This panel also houses the low and high beam functions, while the upper daytime running lights are designed to look like irises and are literally called Audi Eyes. 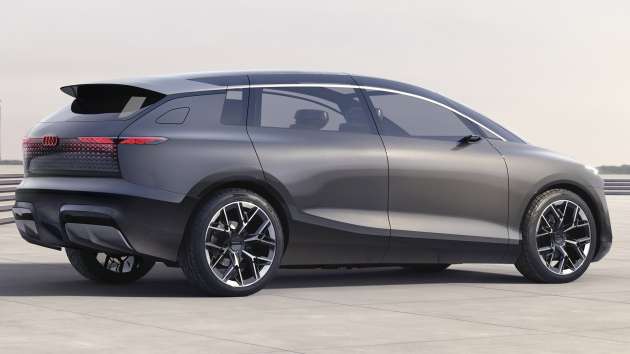 A similar illuminated panel can also be found at the rear, as can a large diffuser. The urbansphere also comes with suicide doors, which hide an illuminated umbrella that is claimed to be inspired by traditional Chinese umbrellas. It lights up both the path and the user, which Audi says not only improves safety but also makes it perfect for taking selfies.

The mechanicals seem rather trivial at this point, but just so you know, the urbansphere rides on the Premium Platform Electric (PPE), developed in conjunction with Porsche. Dual electric motors provide a total system output of 295 kW (401 PS) and 690 Nm of torque, while the underfloor battery (which has a capacity of more than 120 kWh) provides an expected WLTP range of over 750 km. The front motor can be decoupled when not needed to increase efficiency.

The car also comes with an 800-volt electrical architecture that enables up to 270 kW of DC charging power, topping up the battery from five to 80% in 25 minutes and adding more than 300 km of range in just ten minutes. Under the skin, the urbansphere rides on air suspension with semi-active dampers, aluminium multi-link axles (five-link at the front) and four-wheel steering.