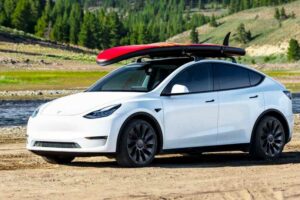 Posted on EVANNEX on December 16, 2021, by Charles Morris

How quickly will electric vehicles replace the gas-burning kind? Estimates are all over the map: we greenies like to think that the tipping point will arrive in a couple of years; fossil fuel fans tend to believe the transition will take decades. What do auto execs think?

President Joe Biden recently set an aspirational target for 50% of US auto sales to be EVs by 2030, and a new survey from consulting firm KPMG (as reported by CNBC) found that many auto industry executives consider it a realistic goal.

KPMG conducted the survey of 1,118 global executives in August. The majority of respondents were CEOs and other C-level executives. Some were from automakers, and some were from top-tier suppliers. Their estimates of what market share EVs would achieve by 2030 varied widely, from 20% to 90%, but on average, the respondents expect 52% of new vehicle sales in the US, Japan and China to be all-electric by 2030.

“There seems to be more general optimism toward EVs than even 12 months ago,” Gary Silberg, Global Head of Automotive at KPMG, told CNBC. “This is probably due to the billions of dollars of freshly committed capital and the bevy of new vehicles coming into the market.”