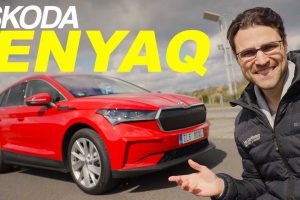 The Volkswagen ID.4’s Czech cousin will be a strong contender in its segment in Europe.

One of the big choices facing European electric crossover buyers will be between the Volkswagen ID.4 and the Skoda Enyaq, two vehicles that are related, but they still have plenty of differences. Some are purely aesthetic, while others are functional and they make the two vehicles different enough to make choosing between them harder.

It could all just come down to which styling language you prefer, be it the rounded and friendlier look of the ID.4 or the more angular and aggressive Skoda. It is worth noting that while for the rest of its range VW has opted for sharp creases and a more angular look, its ID-badged models have softer shapes. Skoda, on the other hand, styled the Enyaq to look pretty much like one of its core models.

Just like in the case of the VW ID.4, the infotainment software is still inconsistent and glitchy. All reviewers who tried out the Volkswagen seem to complain about this, and it appears to be a problem that plagues the Skoda model too – it is likely present in Seat models that rely on the same software.

Autogefuhl’s Thomas experienced the Enyaq for the first time, and while he did find a few areas that were not perfect, as well as some odd design choices, he seems to thoroughly recommend this vehicle. His conclusion is that the Enyaq looks good on the outside, it has a high quality, roomy and nicely designed interior, as well as excellent driving dynamics and maneuverability.

Once the VW group finally fixes its glitchy software, the Skoda Enyaq will become a thoroughly recommendable car, at least based on information presented in this review.