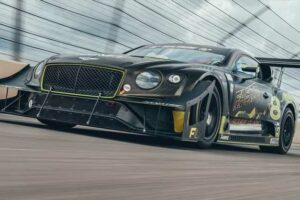 A Bentley Bentayga driven by Rhys Millen set the production-SUV record during the 2018 Pikes Peak International Hill Climb. In 2019, the same team set the production-car record with a Bentley Continental GT. Pandemic restrictions in 2020 limited travel to the U.S. and to the hill climb, but Bentley and Millen were back this year with a wildly modified version of the company’s GT3 race car: the Continental GT3 Pikes Peak. We were there, too.

The aim was to win the Time Attack 1 class, smashing the existing record. Three Pikes Peak events, three wins, three records. Call it an inevitable hat trick, one that would be Bentley’s final official entry at Pikes Peak. That was the plan, anyway, for June 27, 2021. Can you hear God laughing?

Calling Pikes Peak “a challenging test” is like calling a redwood a “big tree.” The runs begin at 9,395 feet above sea level and then climbs all the way to 14,115 feet. There are more than 150 corners in less than 12.5 miles. It’s an extreme, grueling gut check of a course. Never mind the treachery of the road itself, nor the extreme weather inherent to such a massive Colorado mountain; the thin air (about 60 percent as dense as at sea level) causes the bulk of any technical issues. As a car climbs to those heights, its aerodynamics, power, and cooling (both brakes and engines, or batteries in electric cars) all decrease. You get one shot at a run. Caveats out of the way, Bentley appeared to have brought the right tool for the job.

The Continental GT3 Pikes Peak is a monster. Bentley starts with its Continental GT3 road-racing car and goes insane from there. Bentley’s motorsports director (and its former powertrain chief) Paul Williams tells us the 4.0-liter, twin-turbo V-8 makes 750 horsepower at the mountain’s summit. So how much at the starting line? Neither Williams nor anyone else at Bentley would give a straight answer, for reasons known only to them. “A number between 750 and 1,000 horsepower” is the best, though still annoying, answer we got. Why so cagey? Perhaps it has something to do with the fact the car runs on Porsche’s new renewable eFuel. So, let’s go with the idea the Bentley Continental GT3 Pikes Peak makes 1,000 hp at 9,395 feet. The thing is, since there’s 60 percent O2 density at 14,000 feet, the turbos spin fast enough to maintain 32 psi of pressure—which means power output is nearly double the 1,000-hp figure at sea level. And did we mention the carbon-fiber-intensive construction means the car weighs only 2,970 pounds?

The engine is based on the stock Continental GT’s V-8, but the turbos are located out of the vee, necessitating new exhaust manifolds. In addition to the direct fuel injectors, a second set of port injectors is added primarily to assist with detonation cooling. Stronger pistons and connecting rods fire away beneath a rather attractive carbon-fiber intake manifold. A second rear-mounted radiator sits in the GT3’s trunk, and hot air escapes out of large holes in the “boot lid.” The exhaust, made from Inconel, is fully custom. The Bentley Continental GT3 Pikes Peak’s aero is close to mental and produces 30 percent more downforce than the standard race car, with most of its gains made in front. The suspension boasts negative camber for low-speed corners (Pikes Peak, especially toward the top, is littered with them), and water-cooled brakes round out Millen’s ride.

On the Clock—and What Went Wrong

There’s ice up on the mountain when the bid day arrives. Race officials are attacking it with flame throwers. Makes sense. However, by the time we get to the pits, the course’s fourth and top sector is canceled. This means the route’s distance drops from 12-plus miles to 8. Even if Bentley wins the class, the victory will carry an asterisk. The team is not pleased.

Pikes Peak record holder Romain Dumas and his Champion Motorsports Porsche GT2 RS Clubsport are the bogey Bentley needs to best in Time Attack 1. Dumas runs before Millen, posting a quick time of 6:31.914 at an average speed of 85.335 mph, putting it in second place overall behind an open-wheel car in the Unlimited Class. (The latter, a Wolf GB08 TSC-LT driven by 2019 winner Robin Shute, will claim the overall victory with a time of 5:55.246.)

Millen and the Continental GT3 Pikes Peak get off to a fantastic start, punctuated by the car’s outrageous noise as it takes the green flag. Our attention turns to some computer monitors, where the Bentley’s sector-1 time soon appears: 1:32.627, appreciably quicker than Dumas’ 1:38.261. Millen’s sector-2 time follows, 2:08.694 versus Dumas’ 2:14.961. And the upcoming final sector was the Bentley’s best one during practice …

But the final-split time doesn’t show on the screen when it should, and something obviously isn’t right. When the results finally do appear, Millen’s sector-3 run is 2:54.960 for a total time of 6:36.281 with an average speed of 84.995 mph. It means a second-place finish in Time Attack 1, and fourth overall.

Aside from ice shutting down sector 4, the air toward the mountaintop was much denser than normal—one local tells us it’s the densest recorded in the hill climb’s 99-year history. The Bentley Continental GT3 Pikes Peak’s rapidly spinning turbos (150,000 rpm) crammed too much air into the engine, delivering a backfire as the carbon-fiber manifold essentially shattered. That meant Millen ran part of sector 3 without turbo boost.

We Take the Wheel

Luckily, Bentley had a spare manifold, which meant it could stick to its promise of letting us get behind the Continental GT3 Pikes Peak’s wheel the day after the official event. That’s right, in a stroke of absolute madness, the manufacturer decided we should be allowed a go in its hill climber, though it would be at Pikes Peak International Raceway and not on the actual mountain.

“How many laps should I do—like three?”

“At least four or five,” Williams replies. “If you want to do more than that, best give me your credit card.” It’s a reference to how expensive the Porsche eFuel is. We promised we wouldn’t reveal the price, but you wouldn’t believe the figure.

It’s easy to psych yourself out in the hours leading up to driving a car like this. The menacing, bat guano Bentley is an aero car, and only pro drivers tend to have much experience with race cars featuring huge amounts of downforce. The last time I drove something with four-digit downforce, I loved it, but still I’m nervous. Just looking at something as crazed and aggressive as this Bentley, you assume you’re not worthy, not capable, not good enough. You imagine the massive splitter, barge boards, canards, and big wing somehow won’t work with you behind the wheel, and the car will fly into oblivion. And at this racetrack, oblivion happens to be lots of concrete walls.

Bentley detuned the car to “only” 850 horsepower for our experience, but as Millen shakes it down on the track, it looks just as deranged as it did on the mountain. I watch nervously as it spits flames out the side pipes. In fact, though, there’s nothing to stress about.

What a pussycat of a snarling brute. Engaging the clutch is the only tricky part. To prevent accidents when leaving the pits, the Bentley Continental GT3 Pikes Peak starts in first gear but with its clutch open. To close it, you press and hold the left turn-signal button on the Fanatec steering wheel while you push the throttle with your right foot. Once the car is in motion, you switch off the turn indicator and, as you roll down pit lane, hit the red “Pit” button to deactivate the pit-speed limiter.

Give it a good belt of throttle, and you feel the tremendous power, and the grip level is something few people have ever experienced in a car. The Bentley greedily scoots around the first turn and onto the back straight. At the bottom of my vision I see a couple of green lights appear on the steering wheel. Pull the right-hand paddle, and the sequential transmission slams home third gear. Foot in it, the greens appear again as the gearbox snaps off a shift to fourth. It’s time to turn off the track’s oval portion and onto the infield road course. Go to the brakes, and you immediately realize you should’ve waited another quarter mile before decelerating. This is no exaggeration, as these water-cooled, milled billet calipers clamp down on carbon-ceramic rotors in a fashion that’s far better than anything I’ve ever experienced with any type of street car.

Perhaps the worst cliché in automotive journalism is to say a car corners like it’s on rails. Well, the Continental GT3 corners like a snake in a drainpipe. I take the initial turn about 80 percent slower than I could have. There’s grip, grip, and tons more grip. Being it’s my first lap around PPIR, I get confused and take the immediate right, not the correct right-hander a football field further down. This means I’ve shortened one of my five laps. Not the best start.

I’m overly ginger with the Bentley through the rest of the infield course before I pop back onto the oval just before the front straight. The start/finish line is in sight, so jump on the go pedal, though not all the way. The car is in fourth gear by the time it crosses the line, and I feel more confident, but I’m babying the dang thing. Only four laps remain, so it’s time to go hard.

Working around to the infield section again, I try not to shift until I see the yellow lights on the wheel light up. Brake in a spot that feels dangerously late, and again you’re struck by the fact this GT3 could go way deeper still. Apply much more throttle than the last time through, and the Bentley’s sheer mechanical grip leaves you dumbstruck. The combination of all-wheel drive, slick racing rubber, and meaningful downforce glues the front axle to the tarmac. Another mental note: Next time go harder still.

Showing zero concern for the massive front splitter, aim for the rumble strips. The relatively soft suspension eats up bumps in shocking fashion, and the endless grip and 738 lb-ft of torque means Bentley’s Pikes Peak racer simply leaps off the corners. It’s a rocket sled, man.

This time on the front straight, the car reaches fifth gear traveling at more than 150 mph about a foot from a concrete wall. Oh, and this Continental is right-hand drive, so the wall is even closer. The engine wails away before braking and downshifting for the first turn. There’s a nasty-sounding crack as the dual fires from the headers get hit by two afterburner blasts from the blowoff valves. It’s a little surprising just how easy this mountain-crushing machine is to drive, but mostly I concentrate on pushing it harder and harder. On lap four, I fling the multimillion-dollar thing around the same way I would any other car. The Bentley is nowhere near its limits, but it still makes you feel like an absolute hero driver. This car makes you wish for another 25 laps. I shake my left fist in celebration between downshifts to begin the cooldown lap. What fun that was!

Note to the Bentley crew: You have to come back to Pikes Peak and try again. A car this good deserves the full mountain course, deserves the win. Through a smile, motorsports boss Williams reminds me Bentley CEO Adrian Hallmark was responsible for returning the marque to Le Mans in 2003. Reading between the lines, you can bet a Breitling that Bentley, this car, and Millen are all back on the mountain next year.