Best Spy Shots For The Week Of January 2 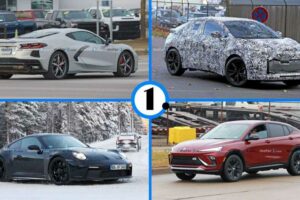 Motor1.com puts up spy shots of upcoming vehicles practically every day and sometimes more often than that. If you want to stay on the cutting edge of what’s on the way check out this list of all of the glimpses of development vehicles from the past week.

BMW i5 Touring Spied In Munich Testing In M60 Guise

BMW has an electric variant of the 5 Series on the way, and this is the Touring wagon variant. It looks a lot like the standard model, except for a modified front end with smaller openings since EVs don’t have the same cooling needs as combustion-powered vehicles.

The Buick Envista is already available in China and is coming to the US soon. This is the first time we’re seeing the American-market version, and it looks identical to the version on sale abroad.

The Chevrolet Corvette sports an odd exhaust design with a single, small-diameter pipe coming out of each side. The rumor goes that the automaker is preparing a more powerful base model that could make over 500 horsepower.

The Mercedes-Benz is giving the CLA-Class and its Shooting Brake counterpart a minor refresh. The biggest tweaks are in front where there are new headlights and a revised fascia. At the back, the taillights receive a new look.

Like the CLA, the GLB-Class also has a refresh coming. The recipe is similar, too. There are changes to the front end’s sculpting and tweaks to the taillights.

This is our first good look inside the new Mercedes GLC Coupe. It features a rectangular instrument display, and an angled screen dominates the center stack.

The 911 ST is based on the 911 GT3 Touring but gives it tweaks like a double-bubble roof. The model takes inspiration from a limited-run 911 race car from the early 1970s.

Toyota is preparing to expand its bZ range of EVs. The styling seems to have similarities to the Small SU EV concept, but the development vehicle has lots of camouflage and body cladding for concealing the look.

The Volkswagen ID.7 debuted at CES, but the car there was in vibrant electroluminescent camouflage that hid the design details. This one is under development in the Arctic and wears  very light camo.

It’s hard to tell by looking at this vehicle, but VW is working on a new Tiguan. The brand’s engineers cleverly conceal the exterior to make the crossover appear to be the current iteration. That platform is reportedly an evolution of the existing underpinnings, and the physical footprint should be a bit larger.